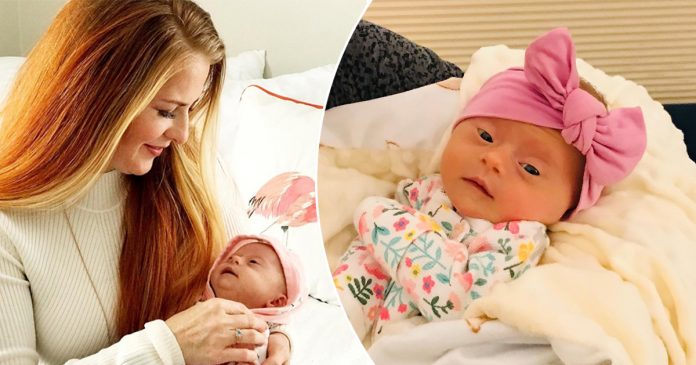 Jessica Egan had the opportunity to witness how excited her colleagues were when they announced their pregnancies. She, too, dreamed about announcing her pregnancy as well when she fell pregnant but one news burst her bubble of joy.

Jessica who is from Salt Lake City, Utah and her husband had gone through multiple rounds of IVF after struggling for years to get pregnant; all of which were failed.

One day, they finally received the happy news that they both waited for so long to hear — Jessica was pregnant.

Unfortunately, their joy did not last long as they later were surprised by a blood test results which revealed that their unborn baby has Down Syndrome.

Down Syndrome is a genetic chromosome disorder that can delay the baby’s physical growth and may cause mild to moderate intellectual disability.

“In that moment I felt extreme devastation,” Jessica told Mamamia.

She was afraid that her pregnancy would not be celebrated by her colleagues when she told them the news. “I spent the next three days at home in tears, afraid to tell anyone the news,” she recalled.

Jessica and her husband later were keen to educate themselves about their child’s diagnosis.

The couple later reached out to a local Down Syndrome foundation which they learned that the condition was nothing to fear about.

“We began to realize that Down syndrome was nothing to fear,” Jessica said. “When our baby [Gwendolyn] was born, we were overwhelmed with love for her.”

By the time little Gwendolyn turned two months old, Jessica later shared her parenting experience on Facebook in an effort to show to other parents that a diagnosis of Down Syndrome is nothing to be afraid of.

In her post, she used the funny euphemism of “placing an order” for a baby to lighten the mood. “When I placed my order I said, ‘Regular amount of chromosomes, please!’” Jessica said.

“That’s what everyone else got, and what I wanted too.”

“They called me shortly after my order was in production,” Jessica continued, “and said ‘Great news, we went ahead and upgraded you to extra chromosomes for free! You’ll receive the extra chromosomes with your completed order in 9 months.’”

Jessica later wrote that the “extra chromosomes” was far better than not having to receive her “order” at all, referring to her years of struggling to conceive

“I decided that receiving my order with extra chromosomes was better than not receiving an order at all, so I settled in to wait for this surprise upgrade to arrive.”

She shared how much she and her husband adored their baby daughter so much that the fears subsided as love replaced them.

“I posted some photos below of the finished product,” the new mother concluded, “and you can see the extra chromosome is so worth it … Would purchase again for sure.”

The post has gone viral since Jessica posted it on Facebook but one thing that she hoped for was that it would comfort parents who have children with Down Syndrome.

“I hope people find comfort from my post,” she added, “but I also hope that people who have no experience with Down syndrome or other chromosomal abnormalities will have their minds and hearts opened.”