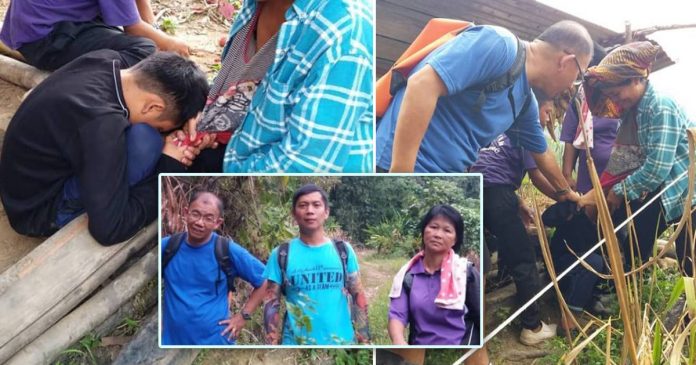 There is an inspiring saying that says, “One child, one teacher, one book, one pen can change the world.” Imagine if there are three dedicated teachers who are willing to go out of their way to help their students.

That was exactly what these teachers from Malaysia did when their student refused to attend school for three weeks.

In order to persuade the 10-year-old student to come back to school after a three-week absence, Tay Oi Leng, Jeffrey Joseph and Zeabenia Mositol took an extra effort to walk for 7.4 miles to visit the student’s home.

According to the headmaster of the Buayan National Primary School, Matius Kusop, the three teachers had to walk for three hours for the return trip to visit the student at his home.

Plus, that was not their first attempt to convince the student to return to school.

“It was the second attempt by the school staff to persuade the boy to come back to school,” Mr. Kusop said.

“During the first visit, our teachers went to his home in Kampung Pongobonon, but they only managed to meet their parents while the boy was nowhere around,” he said.

According to the headmaster, the boy did not attend school for three weeks as he was recovering from feet pain.

However, they later learned from the boy’s parents that during his absence, the boy was recovered but refused to go to school.

“The pupil’s elder brother quit school when he was in Year 6, which is understandable, as last time kids have to travel long distance every day,” Mr. Kusop explained.

“But now, the school has provided hostels and teachers are looking after them (including providing free meals). His two younger siblings, however, are willing to come to school,” he added.

Apparently, the boy had lost interest in studying and neither his parents nor the teachers were successful in persuading the boy to study anymore.

Mr. Kusop further said, “The boy is a quiet student but he is doing well in his academics. It will be a waste if he gives up.

“Our school teachers will also not give up on him and will continue to make him come back to school,” he said.

The National Primary School is located in a remote area on the Crocker Range hills. It is only accessible by four-wheel-drive vehicles on dry days.

Man from Hong Kong flies to the Philippines to take care...