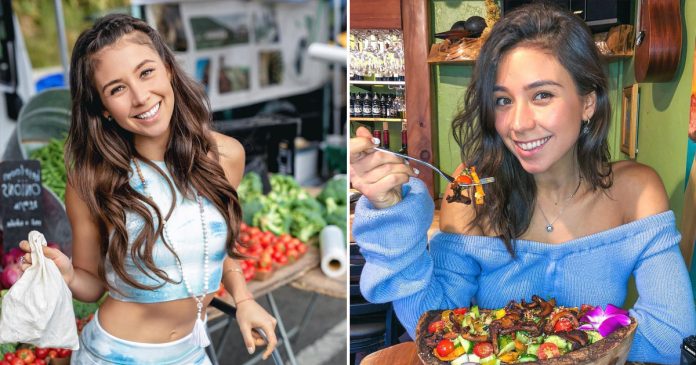 A popular YouTuber is under fire after her fans caught her eating fish at a restaurant while promoting a raw vegan lifestyle at the same time.

California-based YouTuber, Yovana Mendoza Ayres who runs a YouTube channel under the name Rawvana which promotes a raw vegan lifestyle has been receiving backlash from her fans after she was caught eating fish while going out with a friend.

She later admitted in an emotional video on Friday that she has quit the vegan diet after six years of adopting it due to health concerns.

In the video, Ayres explained the reasons she quit the vegan diet were due to issues with the digestive system and that it caused her period to stop.

However, she later said that she still believed in veganism and the benefits it gives despite having to stop following it. “I believe it because I felt it,” she said.

“Six years ago, I adopted a raw vegan diet. Let food be your medicine and medicine be your food. I was able to overcome addictions like alcoholism and smoking cigarettes,” she added.

In spite of no longer adopting a raw vegan lifestyle, Ayres failed to update her fans that she was off the raw vegan diet.

In the video, she admitted that she has been incorporating fish and eggs into her diet since two months ago

Ayres explained that her period stopped in 2014 when she underwent a 25-day water fast.

“I even thought that it was a good thing at one point,” she said. “I learned that not having a period is really not healthy. It’s not good for you.”

“I felt good physically, but the numbers were wrong and I wasn’t getting my period,” she said.

After the visit with doctors, Ayres slowly included more fats into her diet and gave up raw veganism

She got her period back two months later but it was irregular until 2017 when her period stopped again.

The doctors then advised her to eat eggs as she was “basically anemic” but she refused. Her health started worsening as she developed vaginal yeast infection and had small intestine bacterial growth in 2018.

Feeling desperate to regain her health again, Ayres decided to quit veganism. “I was starting to feel desperate for my health and to find a solution,” she said

“And that is when I opened up to the possibility of adding some animal product into my diet. It was really hard because for so long I saw this food, this animal food, as something that is basically toxic for my body. Something that I don’t need. That my body doesn’t need,” she continued.

“To see it as something that could heal me was really hard for me to accept or admit or consider at the time.”

According to Ayres, she was still hoping to get back on the raw vegan diet again one day.