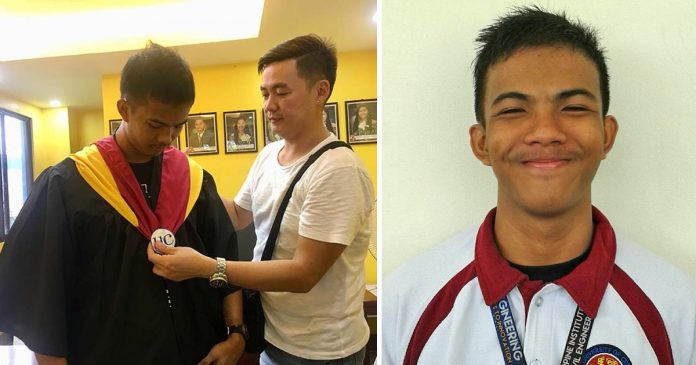 Janryl Tan was 18 years old when he began working his way to pay for college fees. However, unlike most jobs youngsters take up, he worked as a watchman.

Not many young adults can be seen working in this profession but Tan did not mind. He worked throughout studying at the University of Cebu in a civil engineering course.

While the statistics by the Philippine Statistics Authority show that 1 in 10 Filipinos become school dropout due to poverty, Tan refused to let it from stopping him to turn his dream into a reality.

Now, he can finally be proud of his hard work after receiving his diploma with Latin honors.

Coming from a broken family, Tan’s parents were separated which left him and his siblings with their father, Jerry. Their family used to move around from one place to another as they never had one stable place to call home.

When they moved to Cebu City, Tan remembered hopping from one place to another place for at least 13 times. They even had to stay at his grandmother’s stall at Tabo sa Banay, a popular dry goods market in downtown Cebu.

Not long after that, he lost two of his four siblings to dengue.

Determined to change their fate for the better has motivated Tan to study and work at the same time.

He admitted that it was tough to go to classes during the day and work at night. “It’s tough,” Tan told The FREEMAN. “There are times when you just can’t help it but feel sleepy.”

His daily routine started at 6 am when he prepared for class and by 6 pm, he got ready for his night watch duty. He had to patrol the village, monitor the CCTV, write reports and sometimes, attend to residents in need.

Even though his daily schedule was often packed, Tan refused to give up. He dreamed of giving a house to his family, the same reason why he took engineering in the first place.

However, it was not as easy as he thought when he learned how much he had to pay for the college fees.

Thankfully, when there was a vacant watchman post in the village, Tan quickly seized the opportunity. With the job, he managed to earn P6,500 (US$343) and he used the money to help him pay tuition fees.

As he looked back at his journey, Tan knew that everything could be achieved as long as one is determined and positive.

“If you have dreams to study, pursue it. Poverty is not a barrier. Be resilient and be positive. Do not rely on your parents for help. Instead, you should understand their situation,” he said.

“You have to work for your dream.”