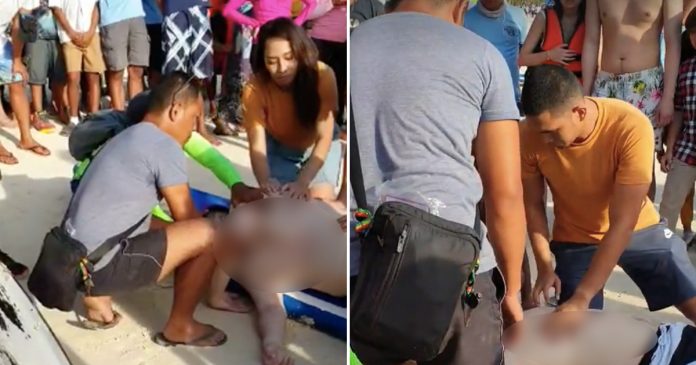 When a couple went on vacation last week to Boracay, a small island in the Philippines, they had no idea they’d end up saving someone’s life!

Couple Louisa Jenkins, a registered nurse, and Justine Navara, a nursing graduate were relaxing by the shore and soaking in the sun when they heard someone had drowned.

The man reportedly was at sea on his paddling board when he slipped and hit his head.

Louisa and Justine were really shocked and immediately rushed to the scene to help him!

No lifeguards were around fast enough, so it turned out Louisa’s training was invaluable in saving the young man’s life.

A beach guard at the scene requested for assistance from a lifeguard, but by the time he arrived, Louisa had already performed CPR.

Justine has urged those who know how to perform CPR to quickly come to the rescue if there are no lifeguards around—but if not, ask for assistance immediately!

“It’s better if others also know how to perform CPR even if they’re not in the medical field. In case something happens again we can help quickly if more people have the knowledge,” he said.

The whole ordeal was caught on camera by JP Liwag Kabigting, who shared the footage in a post on Facebook.

He spoke about the lack of lifeguards in the tourist hotspots, and said the closest lifeguard post was around 500 meters away from the scene, close to Willy’s Rock.

He hinted that if a similar situation were to happen again, lifeguards would be too far away to respond in time, as they might not even be aware of what’s going on.

“Even if the lifeguard saw the incident he can’t respond right away because it’s far. I hope they would place lifeguards at least every 200 meters because the distance between lifeguard posts are too far,” he wrote.

We’re so glad Louisa and Justine got to the young man in time, and we hope he has a quick recovery!