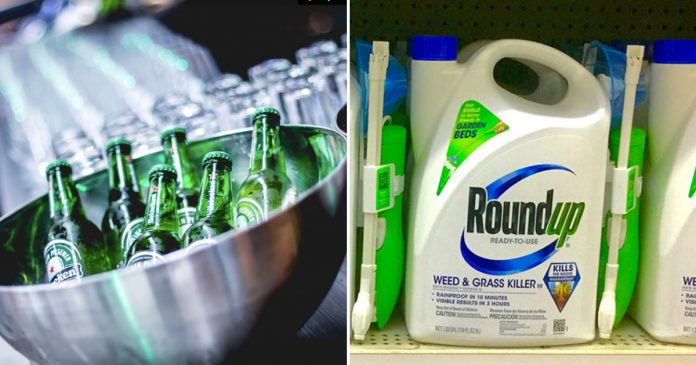 You might want to think twice before you knock down your next pint because traces of a chemical used in weedkiller have been discovered in popular wines and beers, according to a study.

The U.S. Public Research Group (USPIRG) Education Fund looked at 15 beers and five wines, and found traces of the cancer-causing chemical glyphosate in 19 of the beverages!

As for wines, Beringer, Barefoot, and Sutter Home were included in the report.

The chemical is usually found in a widely-used weed-killer called RoundUp, which is owned by Germany’s Bayer AG.

The alcoholic drink with the most amount of glyphosate is the St. Helena wine which you can find at most Target, Walmart stores.

Apparently, there are 51 parts per billion in the drink!

For the beers, Tsingtao Brewery, which is China’s second largest brewery, was the biggest culprit with 49.7 parts per billion, according to USA Today.

“The levels of glyphosate we found are not necessarily dangerous but are still concerning given the potential health risks,” USPIRG said in the study.

However, the Beer Institute industry group confirmed that the levels of the chemical in the drinks aren’t high enough for it to exceed the Environmental Protection Agency’s (EPA) risk level for beverages!

“Our members work with farmers who go to great lengths to raise their crops sustainably and safely.

“The results of the most recent federal testing showed farmers’ use of glyphosate falls well below federal limits,”  a spokesman for the group told USA Today.

Apparently, you would have to drink over 140 glasses of wine daily to just reach the ‘‘No Significant Risk Level” as set by California’s Office of Environmental Health Hazard Assessment (OEHHA)!

But the USPIRG study maintains that even a low level of the chemical can be harmful, and linked it to a risk of cancer.

“For example, in one study, scientists found that 1 part per trillion of glyphosate has the potential to stimulate the growth of breast cancer cells and disrupt the endocrine system,” the report said.

The USPIRG has even called on the US to ban the chemical!