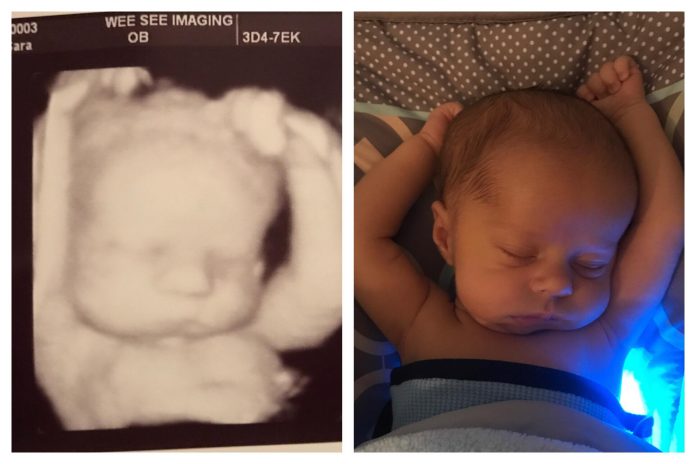 One adorable baby boy named Michael proves that old habits die hard as he continues to do the same exact pose even before he was born.

When his mother Sarah Kelleher Steppling did the ultrasound when she was 39 weeks pregnant with Michael, she was surprised to see her unborn baby poses in a very relaxing way with his tiny arms above his head.

At that time, Sarah did not notice much about Michael’s unusual pose. However, when she saw the ultrasound again after Michael was born, she realized something.

The pose that Michael stroke during the ultrasound was exactly the same as the one he has been doing when he sleeps now.

“I didn’t immediately make the connection to the ultrasound when I first noticed he slept with his arms up. I saw the ultrasound hanging on my mother-in-law’s fridge when he was several weeks old and that’s when it hit me,” Sarah wrote on LoveWhatMatters.

“I made the side by side comparison and was amazed by how similar they were in every little detail. I decided to post it to Reddit because I thought it was interesting content someone else might enjoy seeing.”

“Also, it’s nice to communicate with the outside world after countless days inside nursing a newborn,” Sarah continued.

Just like any new mothers, Sarah was thrilled to have Michael in her life and said that it has been a life-changing experience.

“Having my son has been life-changing. I just look at him and start to cry sometimes because I love him so much. He’s a chill little dude. Keep him fed, changed, and cuddled and he’s happy,” said Sarah.

“My mom says my husband Ross and I don’t know how lucky we got with him,” she added.

“I’m looking forward to seeing what kind of kid this baby turns into. I can’t wait to hear what his voice sounds like. My husband played guitar to my pregnant belly all the time, and I was in ‘Sister Act’ the musical during my 2nd trimester, so we are curious to see if any of that rubbed off on him and if he is musically inclined when he’s older. And, of course, I’m looking forward to him saying Mommy for the first time!”