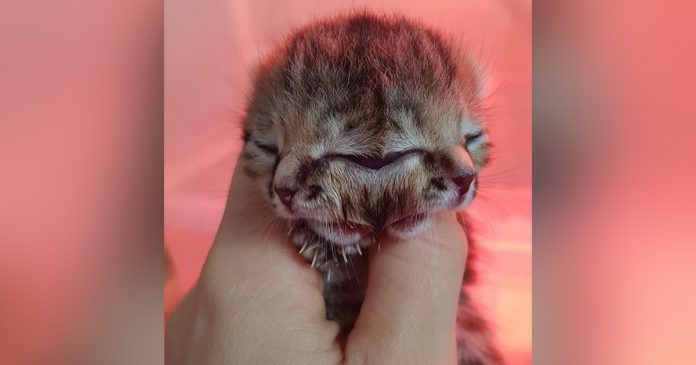 Bettie Bee is just like any ordinary newborn kitten; the kitten has four adorable paws, a tail, two ears but unlike most kittens, Bettie Bee has an extra face!

The kitten who was born in December 2017 has two other siblings who were born normal.

Due to her extra face, Bettie has two noses, two mouths and four eyes.

Just shortly after she was born, her owner knew that Bettie needed emergency care so she was rushed to the vet who later diagnosed her with a rare congenital condition.

Apparently, Bettie suffers from craniofacial duplication which causes some facial features to duplicate while in the womb.

Cats which have two faces like Bettie are known as “Janus cats”.

The vet later told Bettie’s owner that there was very minimal chance of her to survive as the kitten would have several complications to drink milk due to having two mouths.

However, her owner believed that Bettie would survive longer than the vet expected and brought her home.

To everyone’s surprise, Bettie showed an incredible will to survive as she grew healthier and bigger as days passed by.

Bettie also has no problem during the nursing time and she then started to crawl around with her siblings.

When she turned 10 days old, Bettie weighed 200 grams just like any other healthy kitten should weigh.

However, when the kitten turned 16 days old, Bettie caught pneumonia. Her owner took her to the vet but sadly, she did not make it.

Bettie Bee may have lived a short life but we know that her days were filled with love and affection from many people who adored her.