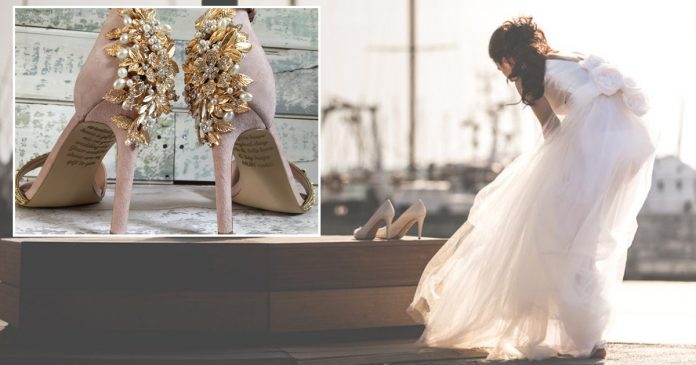 Emma had her wedding shoes to be customized but unbeknownst to her, her terminally ill mother left a heartfelt secret message on the pair of shoes before she passed away.

The woman from Leicestershire got engaged in 2016. One month later, her mother was diagnosed with terminal cancer.

Emma had hoped for her mother to attend her wedding this August but sadly, she passed away in 2017.

Earlier to her mother’s passing, Emma placed an order at the online shop Love and Lace to customize her wedding shoes and paid the deposit.

When she received her bridal shoes last week, she found out that her mother had already paid for the shoes and even had secretly left her a message which is written on the soles of her shoes.

The heartwarming message writes, “Wanted you to have a gift from me on your wedding day. Your wedding shoes are my gift to you. Hope you have a magical day. Lots and lots of love and big hugs, MUM xxxx”

Emma was in absolute shock when she discovered the surprise. “I pulled out the one shoe and I saw part of the message and I couldn’t think who it would be.”

When she realized that it was from her late mother, she became emotional. “I started to cry… I was just absolutely in bits. I couldn’t breathe, I couldn’t talk.”

Before her mother passed away, she wrote letters for their family members but Emma did not get hers. “I didn’t get a letter, she just ran out of time. So this is special to me,” Emma said.

“It was her mum who told me she had cancer and wouldn’t be there for Emma’s wedding day. She told me on the first message she sent me.”

“Her mum actually emailed me and said she wanted to pay for the shoes. I said, ‘well she’s already paid half’. She said, ‘can I pay for it all and then you refund her the money when she gets the shoes?'”

“I was aware that she was terminally ill at the time. I think Emma was kind of hoping she would see the wedding. From the message that she wrote, I think she did intend for it to be after she was gone.”

“Hopefully it will give her a bit of comfort on the day. It will be like walking down the aisle with her mum,” Amanda said.

Former homeless who is a now a CEO hires only the...

[Inspiring Story] Thirty abandoned babies were saved and nurtured by this...