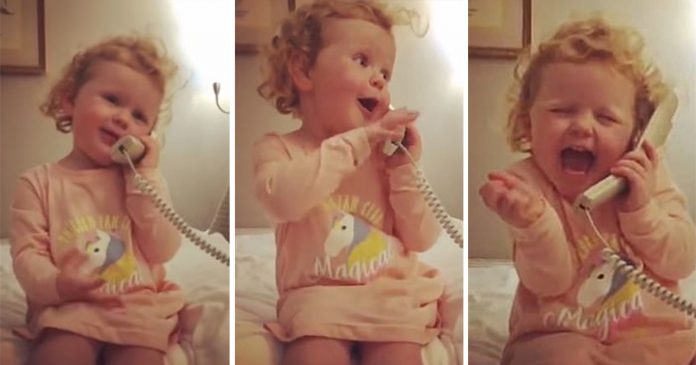 This Irish toddler had a long phone call with her imaginary friend and it is the most hilarious thing you will ever see this week!

3-year-old Daisy Healy who is from Dublin certainly has some latest gossips to share. When she saw the landline phone in their hotel room, she knew that she just had to share them with someone.

In a hilarious video filmed by her father, Alan, Daisy can be seen talking on the phone enthusiastically as she makes up a conversation with her imaginary friend.

“I was just waving and then he keeps getting photos and it’s very mad,” the toddler says in the video.

“Do you know where I’m going? Yea I’m going to the park.”

Her lively facial expression and high-pitched voice certainly make all the juicy gossips worth to hear!

“I’m just driving this, or no I’m not, because all of that was Daddy – Daddy keeps taking photos,” before saying, “We’re just going!” After a long conversation, she then hung up the phone.

According to Alan, he had no idea how Daisy got into the habit of picking up the phone and speaking as she does now since most of her family members are into texting rather than talking on the phone.

“I don’t know where she’s getting it from. It’s her imagination,” he said.

“I’d often come into the sitting room and find her recreating a day in her crèche, with all the dolls sitting on chairs and Daisy playing the role of teacher,” Alan added.

Needless to say, many people loved the video since it was posted on YouTube. So far, the video has garnered more than 280,000 views.

After a Rigorous Divorce Lawsuit Battle, the Princess of Dubai has...