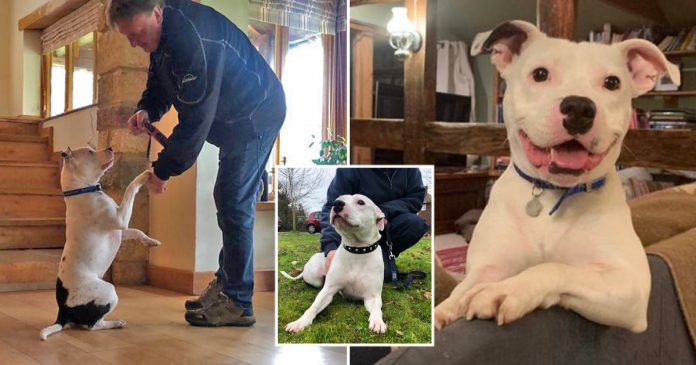 An adorable Staffie who broke the hearts of netizens around the world when his owner left him by the roadside, has finally found a loving forever home!

The pooch was named “Snoop” after the rapper Snoop Dogg, and thousands shared the heartbreaking CCTV footage of him being abandoned on Christmas Eve, in the hopes someone could become his new mom or dad.

The nation also wanted to find out who the cruel ex-owner was!

Do you recognise this man or the car (who usually has a white Staffie). This happened in #Trentham, so more than likely a #Staffordshire resident.

Now, the RSPCA has announced that Snoop has joined a new family in Hertfordshire, and we’re over the moon!

?? We're ecstatic to announce that Snoop, the gorgeous #Staffie abandoned by the roadside, has found a new home! He's living a life of luxury in his new Hertfordshire pad, which has a large garden and is surrounded by fields to run and play in! More here https://t.co/QoHzdkV0PB pic.twitter.com/BFwC0RjQpp

“He’s living a life of luxury in his new Hertfordshire pad, which has a large garden and is surrounded by fields to run and play in!”

His new owner, Laurence Squire, is in love with Snoop too!

“He is a fantastic dog and he settled in straight away. As soon as he came into the house for the first time, he jumped on the sofa and it was as though he decided that was the space for him!

“He loves to lie on the back of the sofa and if I put the fire on he will curl up in front of it. He loves being warm and if he can find his way into a bedroom, you’ll find him under the duvet with his head on the pillow,” he said.

Snoop is so happy to finally experience true love.

Laurence has a huge garden and works from home, so he makes sure Snoop gets plenty of walks and exercise outside!

Spent the afternoon with the famous Snoop, the dog who has touched millions of hearts around the world this Christmas after he was cruelly dumped in Stoke-on-Trent. He is such a loving dog! How could anyone heartlessly abandon him? ? @RSPCA_official is still investigating. pic.twitter.com/J9r3yryHQQ

“When I visited Snoop in his new home, I could tell straight away that he was in the right place – he and Laurence already have a strong bond and Snoop absolutely dotes on him.

“In the days after his abandonment, Snoop was incredibly nervous and anxious, which is no surprise after what happened to him. But staff at Gonsal Farm worked really hard in building up his confidence and it really paid off. The change in Snoop is massive and we at the RSPCA are so incredibly proud of him.

“His story put into the spotlight the very sad reality of abandonment, something which the RSPCA deals with every day. He was dumped at Christmas, a time of year which we spend with our loved ones, so for something so unloving to happen to him was heartbreaking.

“But the love and attention he is getting now from Laurence are wonderful. Snoop is living like a king,” Rachel said.

Visit RSPCA’s link here to find out how you can help abandoned animals like Snoop.