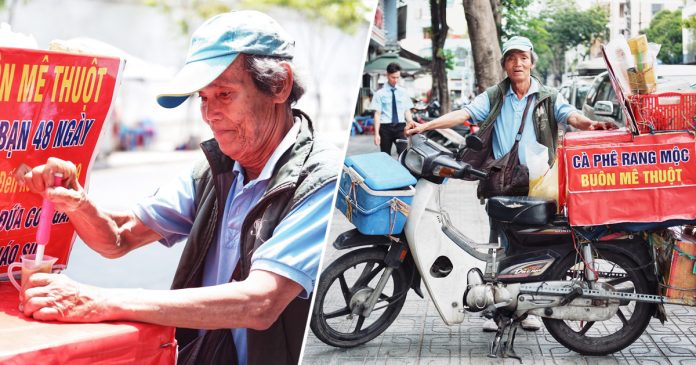 Duyen who earns a living by selling coffee on the street has not seen his two daughters for 10 years since they left to the US to further their studies.

The 74-year-old single father has not seen his daughters since 2009 after their graduation and left him all alone in their hometown, Ho Chi Minh City, Vietnam.

According to Vietucnews, the father has single-handedly raised his two daughters since his wife passed away.

As he is the only sole breadwinner for the family, the father had so much pressure to ensure that his two daughters received the best education and had everything they needed.

He eventually sold his house to send his daughters to universities abroad.

The old coffee vendor then moved to a cheaper and smaller house while still selling coffee every day on the street. All he has been hoping for all these years is his two daughters to graduate with flying colors and secure a decent job.

His daughters are now a doctor and a professor respectively but neither one of them has returned home in the past 10 years to visit their father.

This has prompted the father to travel to the US to reunite with his two daughters. Now that he has saved enough money for flight tickets and expenses, the father has recently put up a banner on his stall that he will be taking a long break from selling coffee.

“I don’t have any valuable things to bring to the US, so I will be bringing 3kg of coffee beans as presents,” the father said.

Even though his two daughters never visited him once, Duyen said that they often call him to check on him. Still, he did not mind as long as his daughters are healthy and doing well

“It depends on how you want to view this matter. For me, my children are my biggest wealth!” the father added.

Inspiring 92yo doctor for 60 years still commutes to work daily...