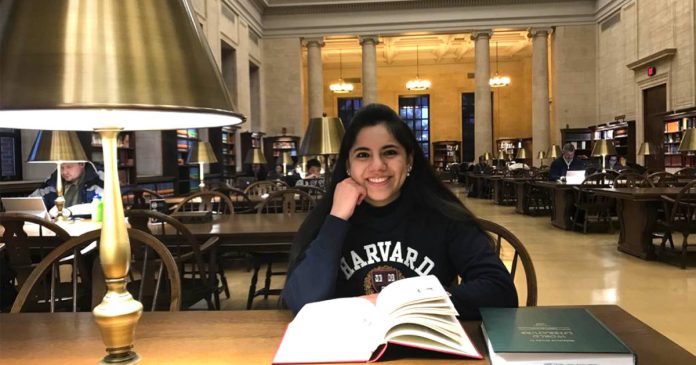 Meet Dafne Almazan who is set to become the first Mexican under 18 to enter a postgraduate program at Harvard University in 100 years.

Almazan who knew how to read and write at the age of 6 proves that she is more than a child prodigy. The inspiring Mexican girl completed high school when she was only 10 years old.

She later graduated with a Bachelor’s degree from Monterrey Institute of Technology and Higher Education (ITESM) when she turned 13 and became the world’s youngest psychologist.

Next, the polyglot will study a master’s in Math education.

“We always consider math difficult, but it’s something that’s part of our lives and we need strategies so that we can teach [the subject] and get children interested,” she said in an interview with EFE.

These are not the only things that Almazan has accomplished so far.

The girl who has an IQ of more than 130 also plays the piano and teaches Mandarin to children.

When she is not studying, Almazan enjoys doing ballet, gymnastics, ice skating, taekwondo, and oil painting.

In fact, Almazan believes that one should invest as much time in hobbies as they do at work and studies. “As a child I studied, but I also played often; I learned to play musical instruments and walked my dogs,”said Almazan, according to The Yucatan Times.

According to Almazan, she said that many gifted children in Mexico gradually lose their potentials and talents after being ignored and misunderstood by adults.

“Gifted children in Mexico are often stereotyped, misdiagnosed, and poorly understood,” she said.

Almazan’s father, Asdrubal Almazan who is a doctor and director of the CEDAT foundation, said, “They are children just like any other, only with an IQ that is way higher than for the rest of the population.”

According to CEDAT, around 93 per cent of gifted children are misdiagnosed with attention deficit hyperactivity disorder (ADHD), which causes them to lose their abilities.

As a result, only 4 percent of one million gifted children in Mexico make it to adulthood and are able to put their abilities to use.

“Mexicans are very poorly informed about what genius-level intellect in a child means. Prodigies are often wrongly diagnosed with ADHD, and parents have no idea how to deal with them. Many are rejected by their classmates and their teachers,” Almazan’s brother, Andrew said.

As for Almazan, she plans to utilize the education model to teach Mathematics in Mexico after she graduated from Harvard.

“My plan is to design and work with models for teaching mathematics to gifted children, which is one of the focuses of the degree,” Almazan said.

“I know it’s hard to reach and guide all gifted children in Mexico, but I’m optimistic that we’ll eventually be able to do so,” she told USA Today.
Credit: The Epoch Times