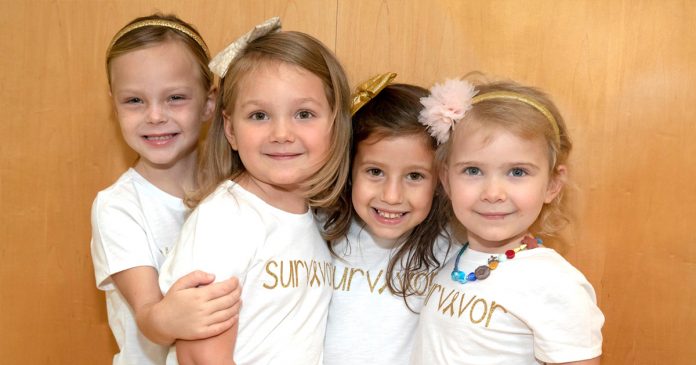 Battling with cancer is not an easy journey and for that, these four little girls were grateful that they had each other’s back when they were diagnosed with cancer a few years ago.

Thankfully, all four of them are now cancer free and to celebrate the good life-changing news, they reunited to commemorate the milestone achievement in a photoshoot together.

McKinley, Chloe, Ava, and Lauren were all diagnosed with cancer a few years back and were treated at Johns Hopkins All Children’s Hospital in St. Petersburg.

All of the girls had different cancer but that did not stop the girls from forming a close bond with each other when they were treated at the hospital.

As they stayed in the same ward, they quickly formed a friendship and spent as much time together between treatments.

Apparently, their friendship seemed to have also given strength and hope to their parents. “She’s three years old and doesn’t have any hair, but all her friends in the hospital look the same way. So it kind of gave her some normality” Lauren’s mom, Shawna Glynn, said.

“It was just always a breath of fresh air to see a familiar face, and to know that she wasn’t alone in there,” another mother said.

Karen Moore, McKinley’s mother also felt the same. “From the standpoint of a mom, too, having other moms to relate to has been phenomenal. Just to have other people going through it at the same time as us.”

When the girls were declared as cancer-free by the doctors, everyone in the hospital felt immensely proud of them.

Posted by Johns Hopkins All Children's Hospital on Friday, August 31, 2018

Obviously, the girls were happy as that meant they finally got to have long hair as they used to!

Two years after they defeated cancer, the girls reunited and decided to do a photoshoot together.

As Lauren has just beaten cancer earlier this year, it made the photoshoot even more meaningful!

Now, the girls have plans to meet annually for a reunion and to remain as friends forever.

Watch the video about these little girls here