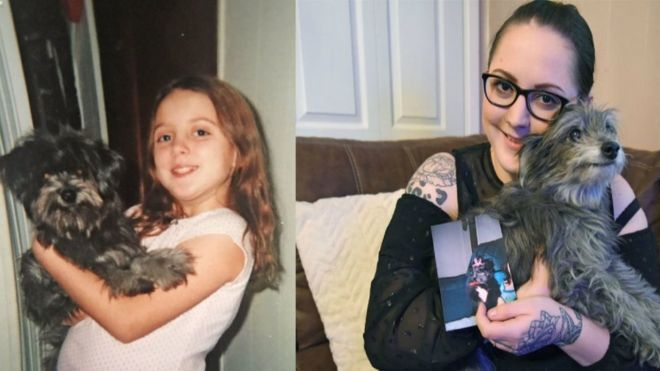 Nicole Grimes was a 10-year-old girl when she first met her first ever puppy, Chloe but sadly, she later had to give up her dog four years later. She never expected that they would reunite in the most surprising way years later.

Nicole and Chloe’s story first began when Nicole’s grandmother, Jane Cecil, gave her a puppy as a present.

“I was 10 years old and all I wanted was a puppy. She was wearing a pink bow when Nana gave her to me,” Nicole told BBC.

Since Chloe was adopted into Nicole’s family, the two had always spent time together. However, they never knew that they would get separated four years later.

“My dad got a new job working from home but Chloe was too yappy and he had to be on the phone all the time,” Nicole said.

Due to Chloe being too noisy, the Grimes later had no other options but to give Chloe up to the Humane Society for adoption.

Nicole was certainly not ready to separate from Chloe but she had to. “I remember my dad picked me up from school when I was 14 with the dog in the back seat. I knew we had to give her away.”

“I was really sad because I loved the dog,” she told TODAY.

Eight years later, Nicole finally considered adopting another dog. That was when her friend on Facebook shared her several photos of an old Pomeranian-poodle which was in need to be re-homed.

Strangely, Nicole felt that the elderly dog looked too familiar when she saw her photos.

“It looked very similar to my puppy when I was little,” she told Observer-Reporter.

She then decided to adopt the Pomeranian poodle and she later learned that the dog had a similar name as her pet puppy when she was younger, Chloe. Nicole also found out that the dog was the same age as her previous dog would have been.

The similarities later sparked Nicole’s curiosity. “When we got her, right away she just fit right in. There was just something about her!!” Nicole later wrote on Facebook.

“As the day went on, different things she did/how she acted was EXACTLY what my old Chloe did. Last night I was holding her and just cried and cried because that dog was hugging me back and I just held her close to my heart,” she added.

“I just knew in my heart this was my Chloe.”

However, her husband was skeptical that the old dog was the same dog as the one she had previously. So, they later brought the old Pomeranian to a vet to scan her microchip.

“That was one of the most exciting moments of my life. I just never thought I’d see her again.”

Now, Chloe is enjoying her life bonding with both Nicole and her 1-year-old daughter, Violet. “They love to play with each other. Chloe is very gentle with Violet and it warms my heart to see them together,” Nicole said.

“It’s like a part of my childhood came back,” she said.

“I really loved this dog. She was a special gift for me.”

During my journey, I encountered a stray cat but I did...