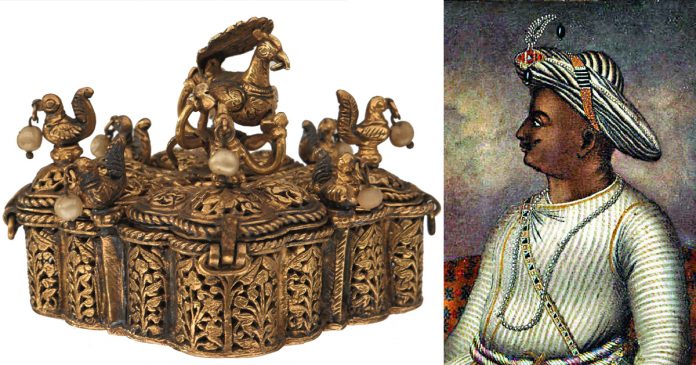 A British couple is set to become overnight millionaires after they discovered the relics found in their attic are worth millions of dollars.

The artifacts which were wrapped in newspaper were actually an Indian sultan’s treasures.

They were taken from the palace of Tipu Sultan after the Indian ruler was defeated by forces led by Duke of Wellington in 1799.

The stunning artifacts which are heavily decorated with gold carving also include the very same gun the sultan used when he went against the British for the last time.

The gun has a tiger stripe pattern that is unique to Tipu Sultan. There is also damage caused by the musket ball that killed the sultan.

The artifacts which include a gun, four swords, a shield, a betel nut box, and gold seal ring were later brought to Britain by Major Thomas Hart after the Fourth Anglo-Mysore war.

The betel nut box still contains betel nuts which are believed to be 220 years old.

They were later passed down to generation after generation in the family and now they belong to the couple who kept them in their Berkshire home.

According to auctioneer Anthony Cribb, it was hard to put a price tag to the cache but he said that they would be worth more than the Tipu Sultan’s artifacts he auctioned previously.

“It is impossible to put a price on these items but I would say this collection is more important than the previous one,” he said.

Hand-drawn map and images relevant to the troops’ disposition during that era.

A RARE CONTEMPORARY MAP OF TROOP POSITIONS AT SERINGAPATAM UNDER EARL CORNWALLIS, being a hand drawn and coloured aerial…

When Cribb first saw the artifacts, he was in utter disbelief. “When I first saw the gun I nearly fainted. It is a once-in-a-lifetime find,” Cribb said.

“The owners are an ordinary family who lives in a Victorian semi-detached house.”

“You could describe this find as like a lottery win for them.”

A gold seal ring from Major Thomas Hart's allocation from the defeat of Tipu Sultan at the fall of Seringapatam. Shown here as it is and also in reverse. In our March 26th Fine Arms & Armour #auction https://t.co/lbBXUKKiOh #tipusultan #tigerofmysore #mysore #seringapatam #india pic.twitter.com/d6I5PwDKt5

The collection will be sold at auction at the Milton House Hotel, near Abingdon, Oxfordshire, on March 26.