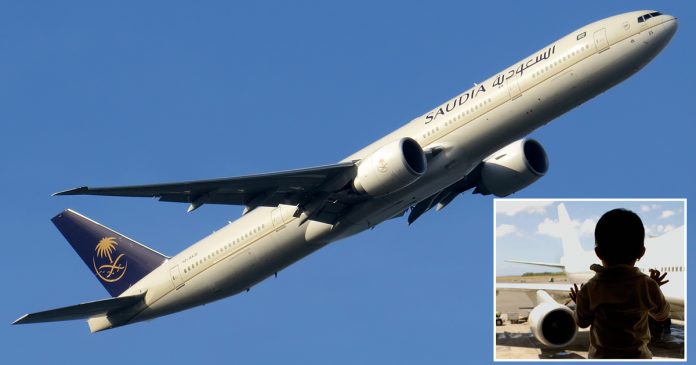 A plane which was headed to Malaysia was forced to fly back to Saudi Arabia when one mom suddenly realized she left her baby in the airport.

Just minutes after takeoff, a mom asked the pilot to turn the Saudia SV832 flight back to  King Abdulaziz International Airport in Jeddah, because she left her kid in the terminal’s waiting area.

In a video which has now gone viral on social media, the pilot can be heard asking the air traffic controller, ”This flight is requesting to come back, a passenger forgot her baby in the waiting area, the poor thing.”

The incident caused a lot of confusion, as aircrafts can usually only turn back in cases of major emergencies.

Airport authorities didn’t even know how they could establish a protocol for such a bizarre scenario!

The airport authorities sound confused as they discuss what to do next.

The pilot requests to turn back to King Abdulaziz airport so the distraught mom could be reunited with her poor baby!

‘May God be with us. Can we come back or what?” the pilot reportedly asked.

An air controller pauses, and then finally gave him permission to return to the hub.

“OK, head back to the gate. This is totally a new one for us!’ aircraft controllers said.

Although flight-tracking data showed an hour late departure for a Saudia flight headed to Kuala Lumpur, it was not clear if it was the same flight.

Planes are usually only given permission to turn back if someone has serious health issues, or in cases of emergencies, or technical problems.

The mom and her kid were finally reunited at the Saudi Arabia airport! There are no updates on the pair, however.

It’s definitely not the first time a plane has been forced to turn back due to ‘special’ circumstances. In 2013, an American Airlines plane, due to fly to New York, turned back to LA because a “very unruly passenger” kept singing Whitney Houston’s I Will Always Love You.