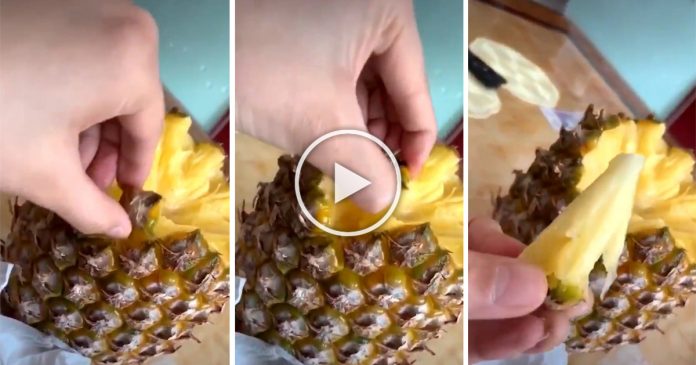 Recently, a video showing the correct way of eating a pineapple went viral on social media and suffice it to say, it had sparked various reactions among many people.

The video which was posted by Tik Tok user Dillon Roberts quickly took the Internet by storm after it reveals that there is no chopping necessary to eat the fruit.

In the video, the snacker can be seen pulling out chunks of the juicy pineapple by pulling the skin towards the center.

Im sorry but what the actual fuck ? pic.twitter.com/DYaDoGMe7i

As if magic was involved, the video later shows the snacker has successfully pulled out a perfect section of the pineapple ready to be eaten.

The smart hack was later shared by user Lewis McCluskey on Twitter and it has been retweeted over 44,983 times and garnered 140,503 likes.

This technique is certainly a faster and easier way to eat pineapple as there is no need to remove the skin and chopping the flesh into bite-sized pieces as most of us have been doing!

In response to the video, many users shared their thoughts with many of the comments revealed that they had never thought of tugging the skin.

“I really been eating pineapple wrong!!!” one user commented.

I really been eating pineapple wrong !!!

“I think I’m going to buy a pineapple today just to try that trick. That is cool,” another user wrote.

I think I’m gna buy a pineapple today just to try that trick. That is lit lool

There are also some user who shared their attempts at copying the hack and the results were amazing.

she said “it tastes just like a pineapple” ? pic.twitter.com/yRj8bnVtbf

Hundreds of people have tried out the hack and many seem to agree that it is the best way to eat a pineapple. If you have not tried it, why not it try it today!