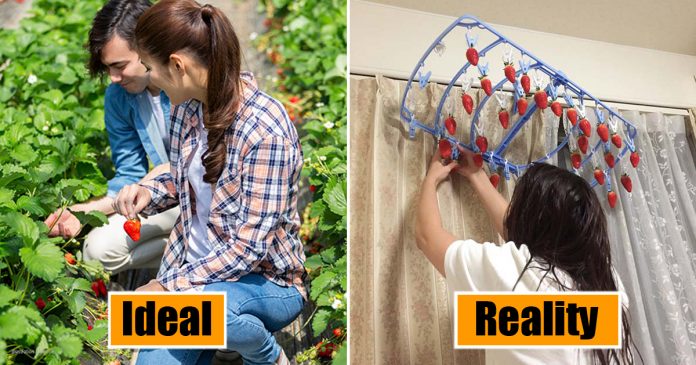 Japan’s work culture which demands long hours and overtime often makes it difficult for their leaves to be approved. That was what happened to a Japanese man recently when he made a promise to go on a vacation with his girlfriend.

Going on a fruit farm date in Japan is common among young couples. Hence, Japanese Twitter user @rikujimasukuman promised to his girlfriend that he would like to take her on a date at a strawberry farm and applied for a leave for the special day.

The two had a perfect date plan for the day—to go strawberry picking together and take pictures as a couple.

However, as the date got closer, @rikujimasukuman became even busier at work and it seemed that he would not be able to make it to the date as his application to go on leave was not approved.

Luckily, his girlfriend understood how hectic career life could be that she later decided to bring the strawberry picking experience to him instead.

His girlfriend then used a clothes-drying rack and hung it on the curtain rod in his apartment.

She then took out a pack of strawberries and clipped each of them onto the clothes-drying rack.

“OK, now we can pick strawberries!” she said when she was done clipping the strawberries to the clothes-drying rack.

His girlfriend’s thoughtful and sweet action moved @rikujimasukuman that he decided to share several photos of the unique strawberry picking experience on Twitter and the Internet went wild for it.

Many users commented on his photos saying that @rikujimasukuman was lucky to have such a girlfriend. “You have a wonderful girlfriend!” one user commented while another user wrote, “So clever and cute! Take good care of her.”

The Twitter post which was posted on March 1 has since garnered 58,000 likes and has been retweeted over 15,000 times!

We hope that @rikujimasukuman will be able to get his leave approved in the future and take his girlfriend to a strawberry farm for a real strawberry picking date!