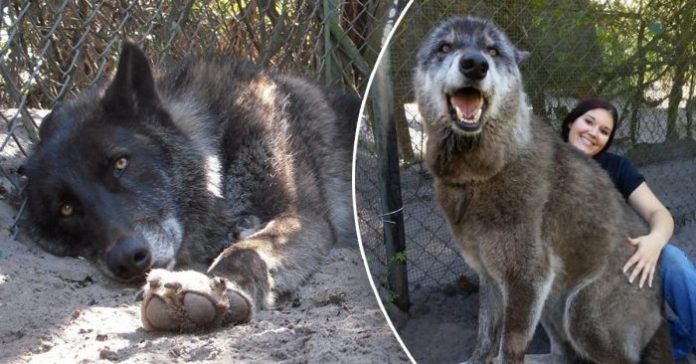 Wolfdog is a unique crossbreed of wolf and domestic dog so while it literally possesses typical features of an average wolf, it is also gentle and friendly like a dog at the same time.

However, for Yuki the wolfdog, it seemed like his owner could no longer accommodate him when he grew larger and stronger which resulted in him being abandoned at a kill shelter.

Thankfully, rescuers from Shy Wolf Sanctuary saved him just in time and gave him a second chance at life.

At first glance, many would think that Yuki would be fierce and too much to handle due to his unusually large build.

However, he is actually a gentle creature according to Brittany Allen who works as staff at the sanctuary.

“We rescued him from a failed house pet situation. Someone purchased him from a breeder and realized he was too much to handle. They dumped him at a kill shelter at 8 months old. We stepped in and provided a home for him and he has been with us ever since,“ Brittany said.

Yuki first came to the sanctuary in 2008 and he later quickly captured everyone’s attention and love thanks to his outgoing personality.

“We even considered him for ambassadorship at one point,” the director of the sanctuary said.

“Yuki loves women, showing off to visitors, and being super goofy”.

As wolfdogs are unadoptable by domestic animal services, it makes it impossible for Yuki to end up anywhere that he could continue to survive when he was abandoned. Luckily, Shy Wolf Sanctuary made it possible.

“They definitely are creatures that demand respect. It would be a much different encounter in the wild than what I do with these guys. The animals I work with have never been in the wild and never will be, so they are more socialized,” Brittany said.

“We show off their adorable moments in the hope of helping people identify with them at least and maybe change their fear response into a healthy respect through education. And also giving an animal a chance at a decent life when otherwise they would be euthanized.”

Compared to wolves which are naturally shy and tend to avoid contacts with humans, wolfdogs, on the other hand, are less predictable.

It can come as a challenge later in life for those who started to raise them as a puppy as the traits of a wolf are not that visible and predictable yet when they are young.

“Wolfdogs are a bit more difficult in my opinion because you don’t exactly know how much wolf behavior vs. dog behavior they will have. Yuki isn’t necessarily more social vs. the pure wolves.”

Nevertheless, thanks to the affection and care he has been receiving over the years, Yuki has a small number of volunteers that he has formed a close relationship with.

Unfortunately, it seems that time is ticking away for Yuki and those who love him as he has only a limited time left to live. 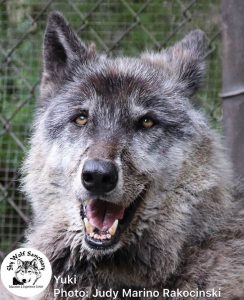 “He was diagnosed with cancer last year and unfortunately it is terminal. We have dealt with this particular cancer before and ultimately you don’t really know how fast you caught it and how much time they have.”

“Yuki has been fighting it for quite a while now and is persevering so it is business as usual while we enjoy our time with Yuki.”

“Saying goodbye to one of our animals is always difficult for our staff and volunteers, and Yuki will be no different.  But it’s important to remember that while many of these animals have rough beginnings, their stories always have happy endings once they get to Shy Wolf Sanctuary. When their time with us is over the last thing they do is make room for our next rescue and happy ending.”