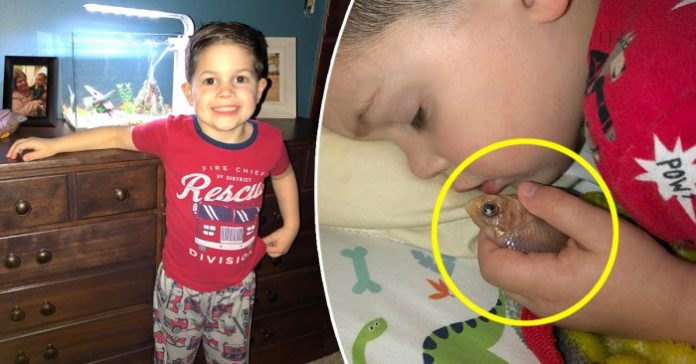 A young boy just loved his goldfish pet too much that he decided to cuddle with it in his bed. Unfortunately, he did not know that it could kill the fish.

Everett Hamlin just about to go to bed when he decided to take his goldfish pet with him to his bed for a cuddle.

The four-year-old ended up sleeping in his bed as he held his goldfish in the left hand.

However, his mother, Tori, later noticed that the goldfish which was named Nemo went missing from the tank.

She then went on to search for the goldfish and noticed that it was in Everett’s hand.

So, Tori woke her son up and told him what had happened. Upon realizing what he had done, Everett became devastated.

“I was shocked at first, but then when he said he just wanted to pet it I was thinking, oh my god, that’s so sad. I didn’t think it was funny that he killed it,” Tori said.

It was when Tori explained later on that Everett learned that what he did had killed the goldfish.

“He had no understanding of what he was doing. Honestly, I’m surprised he caught it. He’s got some good skills there.”

“He loved the goldfish. It’s always been in his bedroom. He loved looking at it. He’s never tried to get it before it happened that night.”

Nevertheless, Tori took the incident as a chance to teach the young boy of what he should or should not do in the future.

“I explained it to him again and he said, ‘that’s alright. We’ll have to get another fish and I won’t touch it. I’m only allowed to touch fish when I go fishing’. I said, ‘yep, that’s right’.”

“Everett has to do stuff like that to learn. Not every kid listens to their parent and learns from that. Sometimes they have to make mistakes to learn from them. It’s part of parenting and growing up.”

Everett now has a new goldfish pet and the young boy promises to leave the fish in the tank at night.

Experts can’t believe their eyes when they saw the size of...