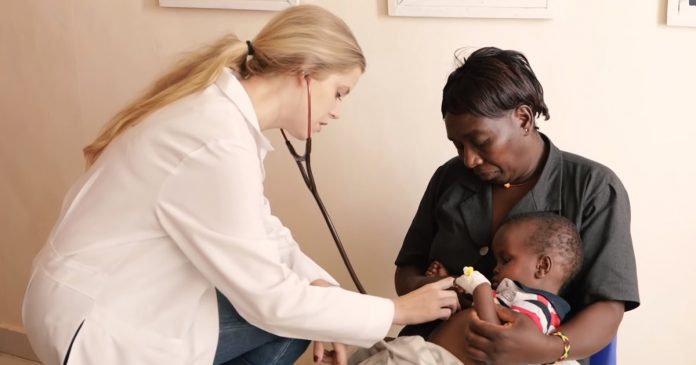 Amy Hehre first went to Kenya for a volunteering project but after finding out how orphans and young children had to suffer in crowded institutions, she knew that she had to do something.

Six years later, the graduate from the University of Kentucky’s Physician Assistant Studies Program later managed to turn her dream into a reality. Together with her husband, Rob, they founded a non-profit OVI Children’s Hospital.

The children’s hospital fully relies on donations to provide free life-saving medical treatments to the orphans and vulnerable children in the country.

However, she admits that it is challenging to fight for the good cause as she has to face multiple challenges.

In her post on Love What Matters, she described her typical day working at OVI Children’s Hospital

“While this life is my absolute dream and passion, I will be the first to tell you it is not easy,” Amy wrote.

Every day, she has to face her young patients who have to battle malnourishment, malaria, traumatic injury and even cancer and AIDS.

Plus, she has to work around the clock and only gets to sleep less than four hours a day. Nevertheless, she knows that is what she has signed up for.

Winnie had to undergo her final round of chemotherapy but the little girl hated the sight of injections, requiring Amy to take extra care of her.

“Winnie has grown to love me as a mother. Let me tell you, as heroic as it might sound to play the role of oncology PA and mommy, these roles are far from glamorous when combined,” Amy wrote.

Winnie absolutely hated the sight of injections, and “would thrash, kick, and scream ‘Mommy!’ for seven hours straight.”

The next morning, she had to visit the remote areas in the village to meet three vulnerable children. At that moment, she felt that she could not make it since she was too tired. “I simply could not do it,” she wrote.

However, the thoughts of the children gave her the strength to make the visits

Later, Amy and Rob met a toddler with microcephaly and epilepsy, and a girl who had a painful skin condition.

After their first visit, they later went to meet an 8-year-old girl who had been suffering from motor-speech ailments and a facial disfiguration that had affected her emotionally.

Just as she thought that she could go back and had a bit of a rest, she received a call telling her that there were two school-age children who were “physically weak.”

She then resumed her duties and went on to meet twins Sally and Selena at their mud home. It was still vivid in Amy’s mind about the first moment she saw Sally. “He was covered in ants, dust, and weighed only nine pounds.”

“He was clenching an ash-covered corn cob in his too-small fist and wearing a ragged pink dress that was barely holding together enough to stay on his tiny body.”

“How old is he?” Amy asked the boy’s relative.

“More than 4,” the relative replied to her.

Apparently, the twins’ mother had abandoned them in the care of their relative who was obviously unprepared and clueless to take care of the malnourished twins.

“This baby boy had waited over four years for someone to find and rescue him from this horrible condition,” Amy wrote

“It is for this reason that we founded the OVI Children’s Hospital,” Amy wrote.

Amy knows that her reality is “wild” and “messy” and that it will “bring many tears and frustration”, but she just cannot ignore the greater cause she is working for and that the fact that thousands, if not hundreds of vulnerable children and orphans in Kenya will benefit from her work.