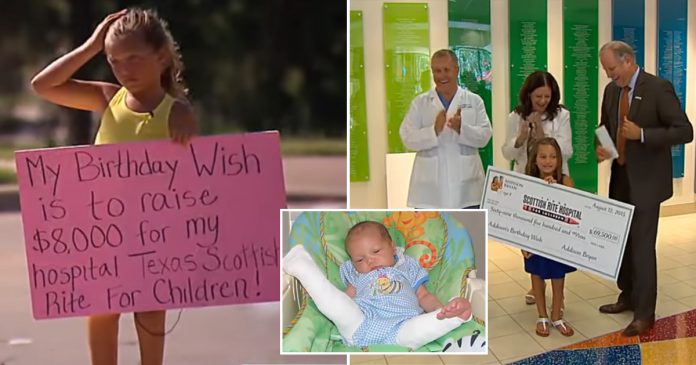 Without the extensive and absolutely free-of-charge treatment at the hospital, little Addie Bryan would never be able to walk like she does today. To express her gratitude, Addie set out to raise a fund.

Little did she know that she would be able to raise US$70,000 for the Texas Scottish Rite Hospital for Children, the hospital where she received her treatment.

Addie Bryan was born with a rare bone disorder called Larsen Syndrome which caused her legs to contort and made it impossible for her to bend them.

Luckily, she got to undergo a few years of treatment at Texas Scottish Rite Hospital for Children for free of charge.

Now, thanks to the dedicated doctors and the free treatment, Addie can not just walk but run so the little girl wanted to repay the kindness she had received from the hospital by raising a fund.

Addie’s original target was only to raise around US$8,000.

“I just hold a sign that says, ‘For my birthday, I want to raise $8,000 for Scottish Rite Hospital,” the girl told USA Today.

Later, her story quickly made headlines on both national and international media outlets and Addie managed to collect a whopping US$19,500.

However, that was not even half of it.

Not long after Addie’s story went viral, Scottish Rite Hospital Vice President of Development Stephanie Brigger received a letter in the mail with a check. “I am almost speechless because I am the one who opened it,” she said.

“The anonymous donor wrote about seeing Addie and the pictures of her and then seeing her running.”

Apparently, an anonymous donor heard Addie’s story and was so impressed by the girl that they donated $50,000 in her name.

“That’s a lot of casts and a lot of prosthetic devices,” Brigger said. “Every little bit and big amounts help us do what we do.”

As for Addie, she was more than happy that she could raise US$70,000 for the ones who had helped make her only dream to be able to walk came true.

She was also delighted to be able to help other children who are currently undergoing treatment at the hospital.

“I think all the kids are going to be happy, and they can get out of the hospital faster,” she said.