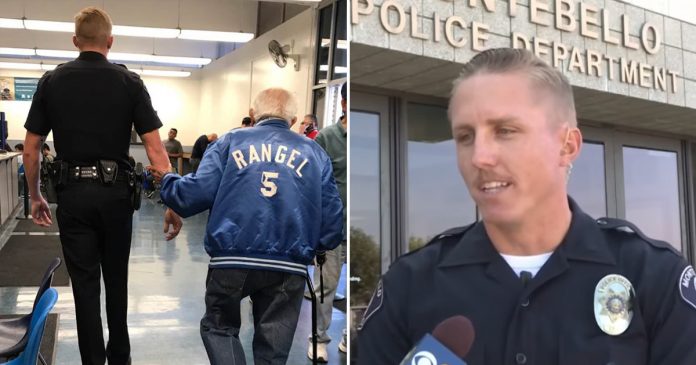 When police officer Robert Josett was called out for an incident at a local bank, he did not expect to deal with a 92-year-old man.

The bank staff had called the police after the elderly man became agitated when his request to withdraw some money was denied due to his expired ID card.

However, the old man could not understand why he received such treatment from the staff so they later called the police for help to remove him.

The elderly man became frustrated when the staff refused to help him out and was later kicked out of the local Bank of America branch.

So, when Robert who works as an officer at Montebello Police Department in Los Angeles, California arrived at the scene, he decided to do something else to help the elderly man.

He showed some mercy to 92-year-old man by helping him to renew his ID card and brought him to the Department of Motor and Vehicles to get a new license.

After he managed to help the old man acquire his new license, he later brought him back to the bank before it closed so that the elderly could withdraw his money.

Later, the Montebello Police Department posted a picture of Robert assisting the 92-year-old man into the bank on Facebook and it immediately made rounds on social media.

Earlier today, officers responded to the Bank of America in Montebello regarding a patron who was causing a disturbance….

Many users praised Robert for helping the old man to renew his license and withdraw his money. “All this Little Grampa wants is to keep his independence. And the officer helped him in a dignified manner. Good Job Officer!” one user wrote.

“Officer Robert Josett thank you so much for helping this elderly man, it could have been my father or grandfather. God Bless you….and thank you for your service,” another user wrote.

Nevertheless, despite all the praises he received, Robert remained humble, saying that what he did was not a big deal.