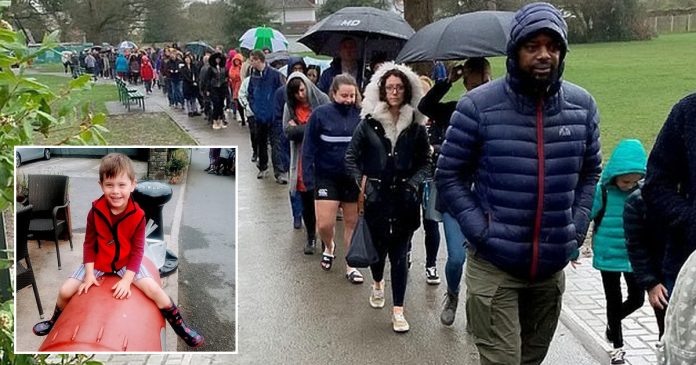 Little Oscar Saxelby-Lee from Worcester, United Kingdom has been suffering from acute lymphoblastic leukemia and is in dire need of matching blood stem cells to survive.

When the doctor told his family that the five-year-old boy has only three months left, they were determined to do everything they could for the boy.

In a bid to find the donors, they later hosted a blood stem cell registration at Pitmaston Primary School and the turnout was surprising!

Thousands of people had turned up at the registration event with a total number of 4,855 people at the testing drive.

Apparently, Oscar’s plea to find matching donors had inspired thousands of people to help save the life of the cancer-stricken boy.

According to the charity which will test the swabs collected, DKMS, they said that the number of people went to the event previously was 2,200.

Oscar was first diagnosed with the illness last December when his parents noticed unexplained bruising all over his body.

He has been going through chemotherapy ever since. However, he needs more aggressive treatment as the disease has developed so quickly.

Now, his family is racing against time as doctors said that the boy’s chances to survive will greatly diminish if he could not get suitable donors within three months.

Oscar has had 20 blood transfusions and four weeks of chemotherapy.

Acute lymphoblastic leukemia is a rare illness where the cancerous cells will turn aggressive over time and causes a large number of underdeveloped white blood cells to be released from affected bone marrow.

These blood cells will later spread and cause symptoms like fatigue, breathing difficulty, pale skin, fever, and joint pain.

Sarah Gray, one of the volunteers at DKMS said that it is important for them to get more people to donate blood stem cells as it will increase the chance of them finding matching donors.

“It’s really difficult to find a match, it’s essentially like winning the lottery. It’s very complex and so the more people we can get on that register, the more chances there are to saves lives of patients like Oscar,” she said.