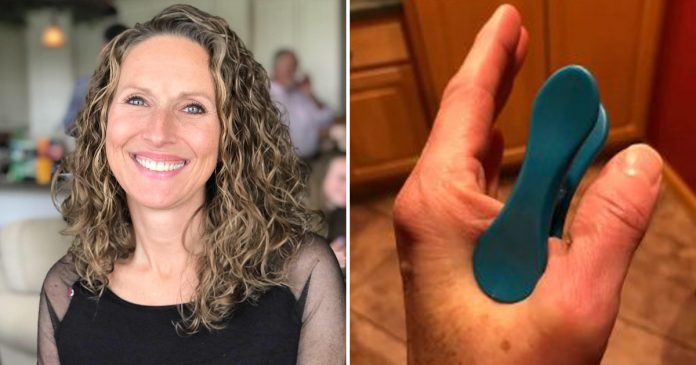 Elizabeth Hayes used to suffer from terrible migraine for hours before she finally found the ultimate cure to the annoying pain: a food clip.

With the help of a simple food clip, Elizabeth now no longer has to rely on painkillers when her migraine comes.

Realizing that many other people could benefit from the simple pain-relieving method, the gluten-free business owner from Indiana later took to Facebook and share the miracle remedy.

In her post, Elizabeth shared how her migraine had caused her to be in excruciating pain.

One day, the pain had reached an “unbearable limit” that her usual pain relief no longer worked.

“This chip clip saved my life tonight. I had a migraine start almost twelve hours ago and about an hour ago it was at an unbearable limit,” Elizabeth wrote.

Tired of the constant migraine, she later looked up to the Internet and found natural pain relief company Aculief that uses acupuncture technique to relieve pain. According to her, the company uses a clip to stimulate the four pressure points on the palm.

“I had exhausted all of my drugs and tricks I usually use to ease my migraines to no avail. I googled fast relief for migraines and it pulled up something called Aculief.”

Elizabeth then decided to try the technique and searched for a clip in her kitchen.

As soon as she found a food clip, she later used the clip to apply pressure over the area around her thumb and forefinger.

Surprisingly, Elizabeth later found out that her pain had reduced by half in just 20 minutes.

“I glanced at the counter and saw this chip clip and decided it would do about the same thing. Within one minute I had some relief, and within twenty my pain was reduced by half!”

“I decided to order the real thing off Amazon. Just wanted to share this with everyone, as I know many of you suffer from migraines also.”

Her post was quickly flooded with comments and likes from other users who have been suffering from migraine as well.

One user commented, “I’ve heard of this before. Like applying pressure there…but using a clip …hmmnn.”

Meanwhile, another user claimed that while the clip did work wonders, it did not cure the pain for good. “If you press on a specific point but yes it works, well it does for me but I found as soon as you stop pressing on the spot the pain comes back. Just my experience, good luck folks,” the user wrote.

Even though it might not cure the pain forever, it is still worth to try for those who have been suffering from migraine. All you need is just a clip and see if it works for you!

This chip clip saved my life tonight. I had a migraine start almost twelve hours ago and about an hour ago it was at an…