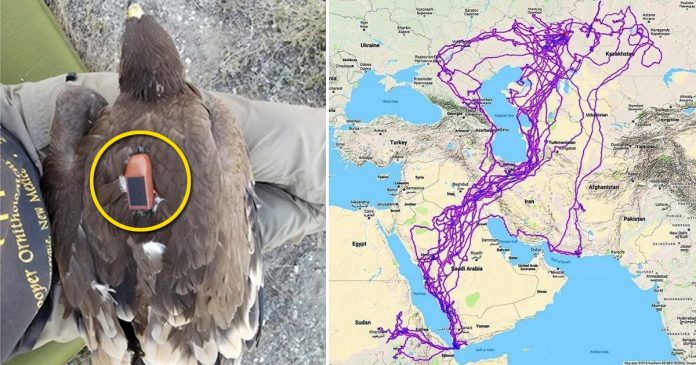 Eagles are not only admired for their majestic appearance but their incredible endurance and predatory skills that are incomparable to any other birds.

While eagles often show off their hunting skills by swooping in and snatch their unsuspecting preys in a flash, they are also known for flying huge distances without having to land.

One man from Jizan region in Saudi Arabia found the remains of an eagle when he was out walking near a swamp.

Surprised by the unusual finding, Fahd Qash further checked the dead eagle’s body and found a tracking device around its neck.

The tracking device also came with the owner’s email on it which Fahd later found out that it was fitted in Kazakhstan.

Apparently, the eagle was a part of a study conducted by a group of scientists whereby they attached twenty GPS on twenty eagles.

The GPS was fitted on each eagle to record every place the bird has visited in a year.

While the eagle has obviously flown to many countries, the map shows that it has always stayed clear of the sea and preferred to fly across the lands.

The eagle has traveled as far as Sudan and Yemen but never crossed the Caspian and the Red Sea as it migrated.

A group of a research team called “British Birds” had previously tracked 16 Steppe eagles and found out that the longest distance of the birds’ daily flight was approximately 220 miles!

They even found that an eagle spends around 31.5% of its time wintering, 41.9% in breeding area and the other 26.6% migrating from a country to another country.

The statistics show that eagles are constantly moving from one place to another and never stay long in a particular area.

While some people were amused by the bird’s preference to stay clear of waters, some people suggested that the reason an eagle prefers flying across the land is that they often soar on thermals when they fly long distances.

As the lands heat up faster than the sea, they provide better thermal support for eagles to soar higher and fly further.