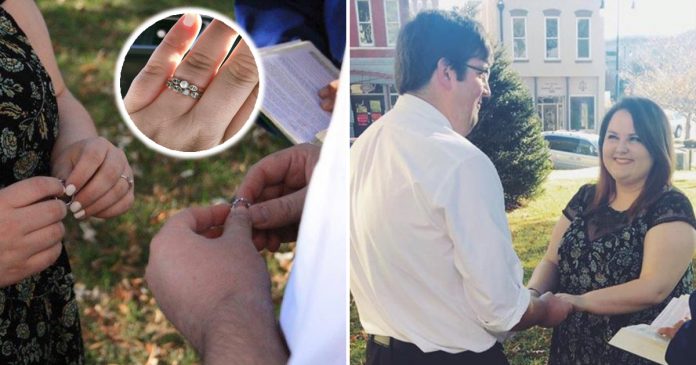 A newlywed couple from Tennessee proved that you cannot put a price tag on love after an employee store from a jewelry store shamed them for buying US$130 engagement rings.

In November 2016, Ariel Desiree McRae was at a Pandora jewelry store in the United States with her then-fiance, Quinn McRae to choose the rings for their engagement.

The couple was served by an employee of the jewelry store before another female employee approached them and commented, “‘Y’all can you believe that some men get these as engagement rings?”

“How pathetic,” the rude employee added.

Hurt by the rude comment, Ariel later took to Facebook about the incident where she defended about the US$130 engagement rings they bought at the store.

“My husband doesn’t have a lot, neither of us do. We scrape and scrape to pay bills and put food in our bellies, but after almost 2 years of dating we decided that we couldn’t wait anymore, so we didn’t,” she wrote in the post.

Ariel continued by writing that she did not really care about the rings.

“I wasn’t even thinking about rings, I just wanted to marry my best friend, but he wouldn’t have it,” she wrote.

“He scraped up just enough money to buy me two matching rings from Pandora. Sterling silver and CZ to be exact. That’s what sits on my ring finger, and I am so in love with them.”

Ariel then described that the disrespectful comment made her husband “face fall.”

“He already felt bad because he couldn’t afford the pear-shaped set that so obviously had my heart and covered my Pinterest page. He already felt like a failure, asking me again and again “Are you sure you’ll be happy with these? Are you sure this is okay?”

“He was so upset at the idea of not making me happy enough and of me not wanting to marry him because my rings didn’t cost enough money or weren’t flashy enough.”

The Facebook post has quickly spread on social media as it has garnered over 108,000 likes and 126,000 shares since it was posted and many people praised her for standing up for her husband.

My husband doesn't have a lot, neither of us do. We scrape and scrape to pay bills and put food in our bellies, but…

“Y’all I would have gotten married to this man if it had been a 25¢ gumball machine ring. ”

Ariel and Quinn later tied the knot in a Tennessee courthouse, on the second anniversary of the day they first met.

“But here I am though, Court-House married, $130 ring set, the love of my life by my side and happier than I could ever imagine,” she ended her post.

The 25-year-old woman never expected for her post to go viral on the Internet and that she has been blown away by the inspiring and encouraging responses she received.

“I’ve received so many messages from people telling me that I gave them the courage to finally propose or get married, even if they couldn’t afford a ring,” she said in an interview with TODAY.

“People shouldn’t have to go into debt for love. It’s the love that’s important. You can get married without rings. Its just material,” Ariel said.