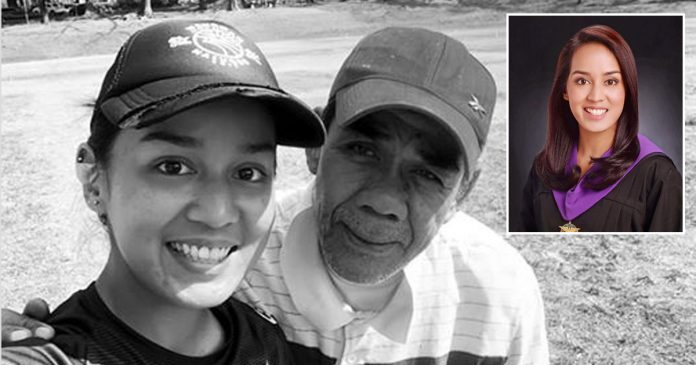 College of Law graduate Alex Castro never forgot the kindness of her beloved soy pudding vendor “Tatay Dong”, who she formed a special bond and friendship with when she was a student at the University of the Philippines-Diliman.

Although Alex is now a qualified lawyer, her Tatay Dong always has a special place in her heart. So last week, she finally returned to the campus to reunite with the man who became like a father to her over so many years.

In a touching Facebook post, Alex, who came from a broken family, expressed her love and gratitude for the man who looked out for her throughout the years she studied at UP-Diliman.

When she first started studying at the university, she would chat with the friendly soy pudding vendor every morning outside the building where she had morning classes.

As soon as Tatay Dong found out that Alex would go to class without any breakfast he was heartbroken.

He started to worry about her and waited for her every morning with a fresh cup of soy pudding to enjoy before she started class.

He was super protective of her and thought of her as his own daughter.

One day in December 2009, when it was raining, Tatay Dong passed Alex an extra little parcel with her fresh cup of soy pudding.

“When I opened it, it was your jacket. The one you were wearing the previous morning and all the mornings before that – your only jacket…The only thing you said to me when I tried to give it back for the last time was: ‘Nilabhan ko na ‘yan, ‘Nak. Iyo na ‘yan,’ (I already washed that, child. It’s yours),” Alex wrote on Facebook.

Alex was so touched by his gesture, and eventually bought him a brand new jacket in return!

He was so proud of the gift, and told everyone that it was given to him by his “daughter”. Aww!

“You were such a huge part of my UP experience. In fact, I can’t think about UP without thinking about you,” Alex continued.

After graduating from UP, she was practicing so hard to become a lawyer that she didn’t have time to see him but always thought about him.

But last week, that all changed. She went back to the same spot he used to sell his soy pudding every day, but couldn’t see him.

But luckily, his friend was there and told her Tatay Dong that she had returned to see him.

Tatay Dong was so happy and quickly rushed to see her.

And Alex was finally able to say the words that Tatay Dong had been waiting for—“Tay, may abogado ka na (Dad, you have a lawyer now)”.

“Did you know, I still have the jacket you gave me. Sometimes, I look at it, wear it, and then I remember you. I always wonder about how you are. And now you’re already a lawyer,” he replied.

Alex was overjoyed to say those words to the man who she looked up to like a father for so many years.

“When I grow up, I want to be just like him’—something I never had the chance to say about my own father,” Alex said.

The heartwarming post has touched the hearts of thousands of people on the internet, and serves as a reminder to always be kind to everyone we encounter—you never know, you may just form a special friendship with someone unexpected!