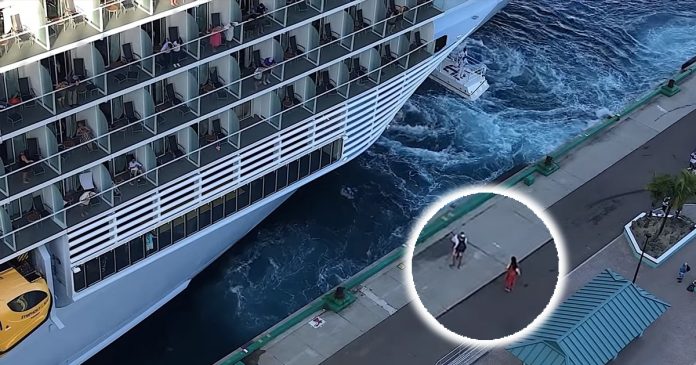 An unlucky couple was caught on camera watching their cruise ship leave them behind after they arrived 45 minutes late for boarding.

The Royal Caribbean cruise snip ‘Symphony of the Seas’, which left from Nassau, Bahamas on February 15, was on day six of the week-long cruise from Miami.

An onlooker who happened to be sitting on the deck of another cruise ship, Norwegian Bliss, recorded the whole thing.

They said the all-aboard call was at 3.30pm, and 45 minutes later, the gangway was taken away, doors were closed and the lines were let loose.

Just five minutes later, the hapless couple turned up with arms full of bags from their shopping trip.

At first, it seems like the couple hasn’t realized they’re about to be left behind yet.

When they catch on, it’s already too late…

They start waving at their cruise ship frantically as the ship’s propellers churn and start frothing up the water.

Fellow passengers aboard the Symphony of the Seas don’t seem too bothered that they’re being left behind, as they look on without a care in the world.

The couple did their best to solve the situation and spoke to some workers who happen to be walking by.

But the Symphony of the Seas sets sail without them.

The look of defeat—the devastated pair trudge slowly away from the pier.

The impressive passenger ship is the largest of its kind in the world.

Maybe a miracle could happen—if they were late because they were on a tour organized through the cruise company, they might decide to help them find their way home.

But as they were the only ones late, that seems unlikely. Time to fork up!

Watch the whole thing below—how unlucky are they?