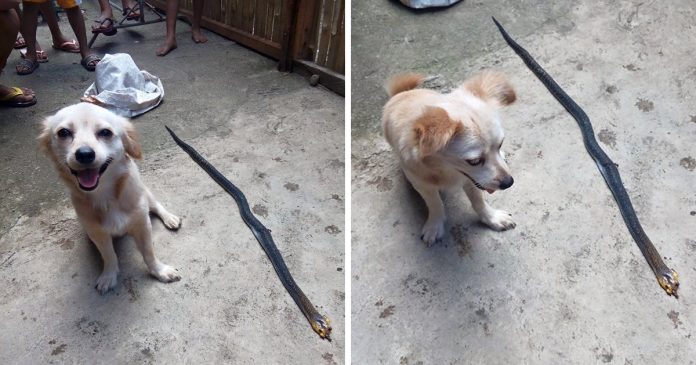 It is never a good feeling when we lose our beloved pet and it’s even more heartbreaking if they died trying to save us.

A pet lover named Jego Macs posted an unfortunate story on his Facebook on how his dog Moana died heroicly after she tried to kill a cobra that sneaked into their home. At that time, Macs was watching television in the house when he heard his dog barking loudly. Macs initially pay no attention to the dog thinking that Moana was just playing.

But after the loud bark, Macs found out that Moana was trying to bite and pull something underneath the stairs—that turned out to be a poisonous cobra!

Didn’t realize that his dog was already bitten by the cobra, Macs hastily killed the snake and relieved that the family was saved by Moana’s vigilance. Macs happily posted about Moana’s heroic act on his social media and telling how proud he is that the dog risked its life for the family.

“Moana, I love you! You’re unbelievable, you’re really a hero! You saved my life, all of us your family! So love your dogs because they are smart and they can save you, even if they risk their lives because they love us more than themselves!”

Not long after, the venom from the snake’s bite probably has taken its toll on Moana and the Shitzu crossbreed chihuahua has tragically died only around five minutes after. Macs’ initial joy turned into sudden sorrow as he said that they were unable to immediately bring Moana to the vet because they are not aware that she had been bitten by the snake.

There was also no service vehicle at the moment that can immediately bring the dog to a vet—which was 15 minutes away. The cobra’s venom also happened to spread very quickly, leading to the instant death of Moana. Macs emphasized that he never neglect Moana or wanted her to die because she is part of the family.