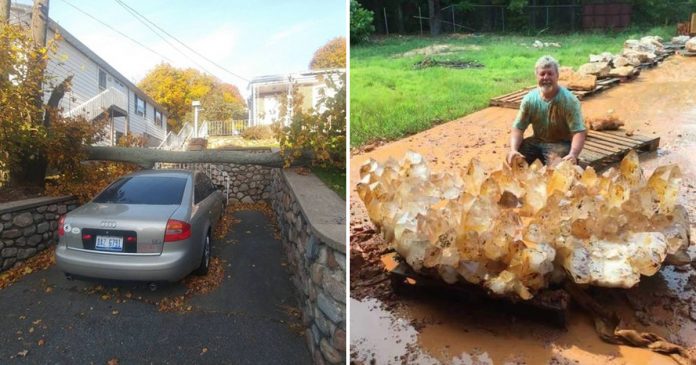 Do lucky people really exist? Some people were born so lucky, other people have a hard time believing that things happening to them were mere coincidence.

These 17 pictures prove that some people just got extremely lucky when they least expected.

Imagine hanging out in the mud of Arkansas and found a chunk of quartz worth $4 million.

“These coins stopped a bullet and saved my great-grandfather’s life during World War I.” Out of all places, the bullet hit the small space of the coins.

You could’ve started the morning all miserable, but imagine having this much luck that draws you out of misfortune.

Just two more lucky men parked together and avoided another misfortune—all in that small space in between the two cars.

Imagine buying a new wallet that comes together with $2 inside—ultimate happiness.

People usually associated how lucky you are when you found 4-leaf-clover. How lucky could you be when you find 5-leaf-clover, then?

We always wish that the mall has a discounted price even when it’s not on special occasion. When the mall really had a special occasion, this lucky person actually won a 100% discount—which basically means he or she gets to buy things for FREE.

The person decided to reparked his car a second before the road was destroyed. Talk about lucky guts.

These guys just wanted to play board games so they decided to buy a used one. it turned out that the used board game came with jewelry worth thousands of dollars.

Double the joy, double the happiness. Who wouldn’t be happy about a buy-one-free-one surprise?

When you just avoided the biggest disaster of all times and looked like you’re turning your car for performance purposes.

It was a very rare opportunity to visit The Great Wall of China when there are almost no people at all but this person was fortunate enough to go on a tour where there were virtually no other people. The sun also had not hit the Mongolian side so it was still covered in snow from the night before.

The kid just wanted a high-five from his favorite gold player but got the golf ball he played instead.

“Just my luck! I accidentally shredded a receipt that I still needed to record. Luckily, it was short enough to fit horizontally into my paper shredder and the amount was preserved on a single strip!”

Nails are always the enemy to any tires. Luckily this tire got to make friends with the nail.

It’s almost impossible to find eggs with more than one yolk, but this person found 3 yolks in a single egg!

Talk about lucky coincidence! Have you had your lucky moment? Share with us in the comment section!