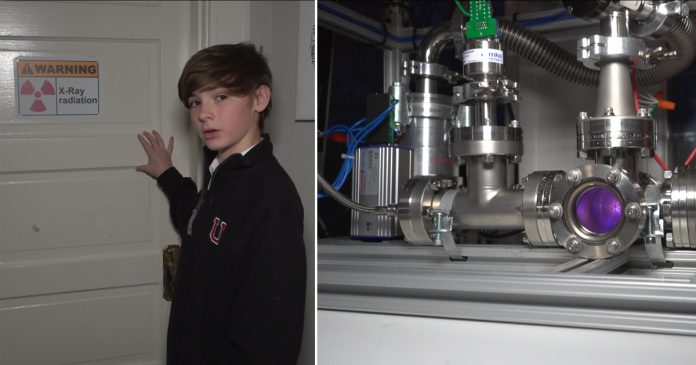 Unlike most of his peers who prefer playing video games, 14-year-old Jackson Oswalt spends his time working in a laboratory.

Now, he is dubbed by experts as the youngest person in America to build a working nuclear fusion reactor and possibly, in the world as well.

The teenage boy from Memphis, Tennessee, began working on the nuclear fusion reactor when he was only 12 years old.

The decision was made after he did not want to spend his leisure time just playing video games like Fortnite.

“A couple of years back, all I did was play video games,” he told USA Today. “And I decided I didn’t want to spend all my life doing video games.”

The boy then began scouring the Internet to do some research about nuclear fusion as he was most interested in the field.

While browsing through the Internet, he came across Taylor Wilson from Texarkana who set a world record at only 14 years old and gained international recognition as the youngest person to build a nuclear fusion reactor in his parents’ garage.

“The start of the process was just learning about what other people had done with their fusion reactors,” explained Oswalt.

“After that, I assembled a list of parts I needed. [I] got those parts off eBay primarily and then often times the parts that I managed to scrounge off of eBay weren’t exactly what I needed. So, I’d have to modify them to be able to do what I needed to do for my project.”

Oswalt even converted his playroom into a functioning lab. He had to spend between $8,000 and $10,000 to collect the parts he needed to build the nuclear fusion reactor over the course of a year.

Finding the parts, however, was not the real challenge. Apparently, putting them together and making sure that all of the parts worked was the toughest part.

Nevertheless, Oswalt relied on trial and error and made an online forum amateur for physicists, Open Source Fusor Research Consortium as his primary reference to build the nuclear fusion reactor.

“After a while, it became pretty simple to realize how it all worked together, but at the start it was definitely figuring out one aspect of it, memorizing what that actually meant and then moving on to a different aspect of it,” Oswalt said.

“Eventually all those pieces of the puzzle came together to make a good project,” he added.

He also posted the updates on his project on the same forum. “For those that haven’t seen my recent posts, it will come as a major surprise that I would even consider believing I had achieved fusion,” Oswalt wrote in a post dated February 1, 2018.

“I have made an enormous amount of progress resulting from fixing major leaks in my system. I now have results that I believe to be worthy,” he continued.

His finding was also verified by Richard Hull, a 72-year-old retired electronics engineer from Richmond.

This also meant that he managed to beat Wilson’s record!

So far, scientists are yet to discover ways for a nuclear fusion reactor like the sun is able to release energy more than what it uses. Nevertheless, with young and talented minds like Oswalt, it is not impossible that scientists could figure the solution sooner or later.