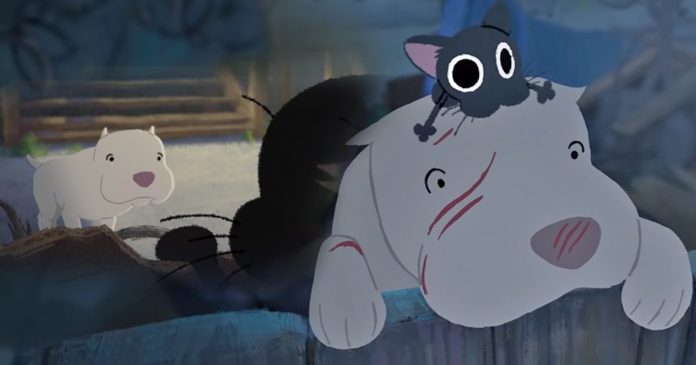 Count on Pixar Animation Studios to make beautiful and heartwarming stories that will leave its viewers weeping and this time, it is a heartwrenching story between a kitten and a pit bull.

Recently, Pixar has released a touching story between an abused pit bull and a stray kitten and it is nothing like you have ever seen.

The short film entitled “Kitbull” is a product of Pixar’s new SparkShorts program which tells a story between two unlikely animals who have been neglected.

In the short film, a stray kitten meets an abused pit bull and as the story develops, the two forms a close friendship after a heartwarming encounter

The director of the animation film, Rosana Sullivan said that it was not her plan to come up with such a story at first. It actually began after several drawings of a little kitten

“To be fully honest, it started from a cat video,” – Rosana explained in the behind the scenes video. “I love watching cat videos in times of stress. And I thought, you know what, I just want to draw a little kitten doing something silly and very very cat-like.”

“At first, I just wanted to draw something that made me feel good and was fun, but it evolved into something more personal to me,” she said.

“I realized that growing up I was always very sensitive and very shy. And had actually a lot trouble making connections, making friendships,” she continued.

“So I related to this kitten because it never really stepped out of its comfort zone to be vulnerable and make a connection. So that’s eventually what the story became.”

The unlikely friendship began when a stray kitten saw a pit bull from inside a cardboard box where he takes refuge from the rain.

Even though the kitten is intimidated by the pit bull at first, he slowly opens up to the pit bull after seeing firsthand the bruises and the cuts on the pit bull’s body as a result of being abused by the owner.

From that moment, the two become close to each other and decide to escape from the abusive owner.

Luckily, the kitten and the pit bull later meet a loving stranger and finally live a life they deserve.

The short film has received more than 3 million views since it was posted by Pixar on YouTube.

This couple hasn’t cut their hair in 10 years. The reaction...