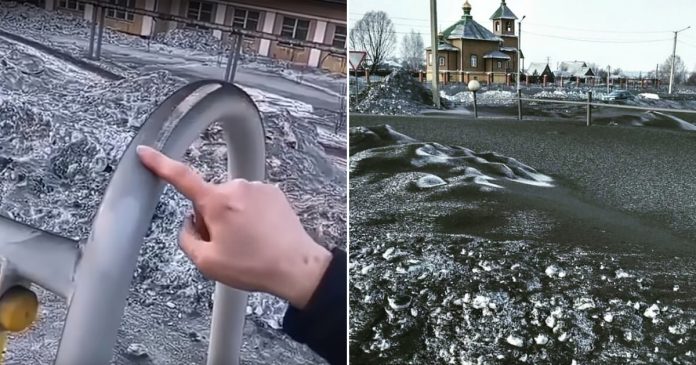 The weather has taken a surprisingly gothic turn in Siberia, Russia—locals suddenly woke up to their streets blanketed in a layer of eerie, black snow.

Some may think the world is about to end if they catch glimpse of black snow falling from the sky.

It’s such a strange sight! Russian media has called the sight “post-apocalyptic”.

And the reason behind the snow’s sinister coloring has even been dubbed a “man-made ecological catastrophe”.

The black snow actually fell in south-western Siberia, in the Kemerovo region, in the Kuznetsk Basin—which is its coal-mining centre, according to IFL Science.

Haunting footage and snaps of the strange occurrence shows streets, houses and cars completely covered in the substance.

It looks so surreal.

Although the snow might look almost magical, the real reason behind it is caused by pollution.

Which means the snow is most probably toxic.

Although the area’s coal mining museum is one of Keremovo’s top tourist hot spots, it’s sadly damaging the environment.

So residents are majorly concerned about the black snow which this week fell over Leninsk, Kiselyovsk, and Prokopyevsk cities.

“It’s harder to find white snow than black snow during the winter,” Vladimir Slivyak, a member of the Ecodefense environmental group told The Guardian.

Local media reports from the Siberian Times suggest that the plant in the area hasn’t filtered its fumes sufficiently.

The dust contains several harmful heavy metals such as mercury and arsenic, according to environmental activists.

The director general of the factory in Prokopyevskaya, Anatoly Volkov, told TV channel Vesti-KUzbass that a shield, which protects coal powder from entering the air stopped working.

We hope something can be done before it affects the health of residents!