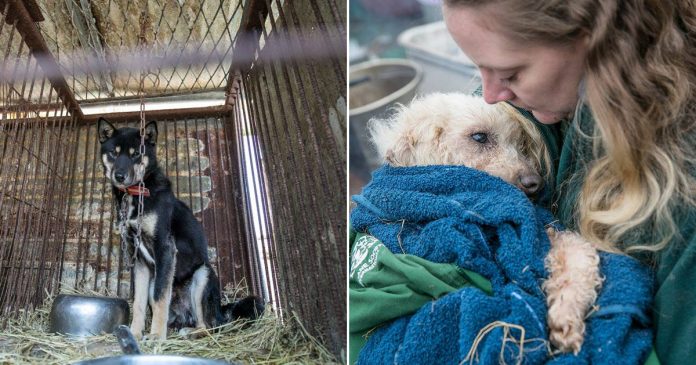 Hundreds of poor puppies and dogs have been saved from a South Korean dog meat farm by animal rights charity—Humane Society International (HSI).

Almost 200 poor pooches had been kept in horrific, cramped conditions, and were locked up in filthy cages.

The dogs, which included breeds such as Pomeranians, poodles, huskies, corgis, Chihuahuas, Yorkshire terriers, Shih Tzus and French bulldogs, were bred for eight years for both meat, and to be sold as pets.

“The lines between puppy mills and dog meat farms are routinely blurred throughout South Korea,” Nara Kim of HSI South Korea wrote in a statement on behalf of the charity.

“These dogs are suffering at the hands of two abusive industries, their ultimate fate depending on whether they will sell for more money as a pet or for meat.”

Many of the pups, many who were newborns, were discovered cramped in cages which had exposed wire floors.

The flooring meant many dogs had untreated injured paws.

Heat lamps were the only source of warmth for the newborns, and they also had some tires for insulation.

But many of the dogs bred for meat were made to stay outside in the freezing cold until they were bought by restaurants in the area.

This poor dog looks so frightened!

He just needs a hug.

HSI shared a heartbreaking video on Facebook which showed the dirty and inhumane conditions the poor dogs were forced to live in.

“Our Animal Rescue Team is LIVE on the ground in Hongseong, South Korea preparing to shut down a dog meat and puppy mill farm.

“They’ll be rescuing nearly 200 dogs and sending them to Canada and the U.S where they’ll be adopted into new, loving homes!” the video caption reads.

The rescue dogs will all be flown to Canada and the US where the HSI will put them up for adoption.

The HSI team are doing an amazing job! If you want to support their work, you can donate here.