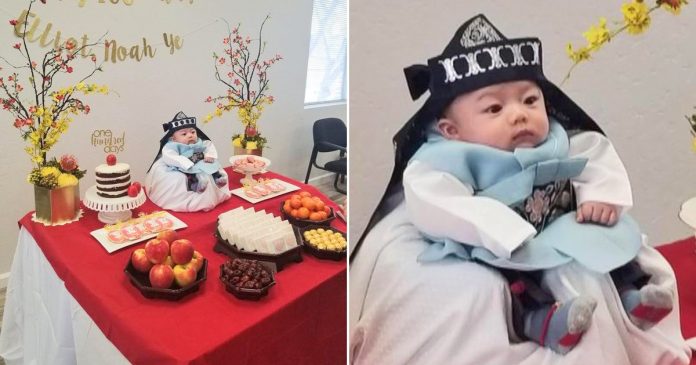 Baek-il or literally means 100 days in Korean is a traditional celebration celebrated by the Koreans when a baby is 100-days-old.

Recently, a Twitter user called Lorraine Ye shared a baek-il celebration picture of her nephew, Elliot, and it has gone viral. The 25-year-old Lorraine explained that the celebration is to celebrate the babies ups and downs during those 100 days of life.

it was my nephew's 100 day and none of us were worthy pic.twitter.com/wGuYKNwERc

“It’s a celebration of life! Historically, lots of things played into babies falling ill within the first hundred days, like frigid temperatures or poor living conditions.”

People can’t get enough of this little one!

Lorraine added that dressing the baby in hanbok—the Korean traditional wear is a part of the celebration, alongside serving rice cakes and wishing the baby longevity and blessings in life.

What makes the picture of this baby called Elliot gone viral was due to its overload cuteness while looking like a complete tiny emperor.

Along with his cute hanbok, people are amused by Elliot’s superior emperor-like expression.

Thanks to that, a lot of people are making memes out of Elliot’s baek-il celebration picture and we can’t help to giggle along.

The small emperor definitely had a lot in mind!

There is also someone turning the baby’s picture into drawing and the resemblance is uncanny!

Lorraine said that she and her family were shocked that her tweet was viral, but are nevertheless happy about it.

“It was a low-key family gathering with no more than 17 or 18 people. We’re happy though-it’s easy for the Internet to turn something into a dark twisted meme, and Elliot’s been received so well we can’t help but be happy about it all.”

Elliot is half Korean and half Chinese, so he had an outfit change after that.

Thanks to people’s demand, the family has also made an Instagram account for Elliot as a lot of people would like to see more of his cuteness.

May you live long and prosper, tiny emperor!