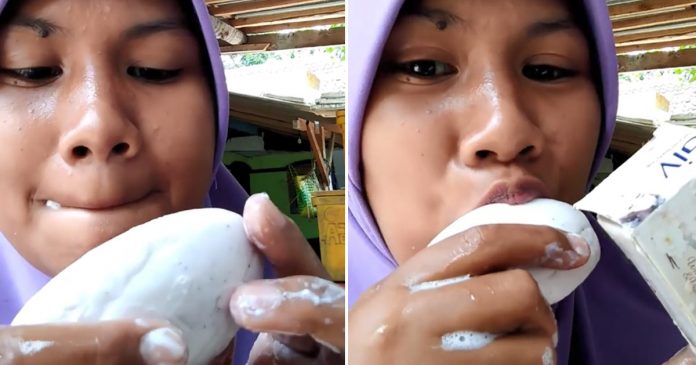 These days people are willing to do a lot of things to go viral and this woman from Indonesia is definitely one of them.

This lady named Khosik Assyifa has recently gone viral on the internet after she uploaded a few videos showing herself casually trying a few types of soap. The videos were not the normal soap review where you checked out the smell or texture of the soap because she apparently tried out by eating them!

She casually eats the soap!

Viewed for more than 200,000 times, Khosik’s video showed her lathering the soap with her wet hands and proceeded to eat the bubbles produced. In most of her videos, Khosik was seen as if she really enjoyed her time eating the soap and frequently uttered the word ‘enak’ which means delicious.

Shockingly, this is not the first time Khosik was seen eating soap because previously she uploaded videos of her trying out soap from different brands such as Giv, Lifebuoy and Lux. Khosik’s weird habit draws up debate among people as they were concerned with her health after eating the soap.

However, a health expert from the University of Columbia, Alice stated that soap consisted of non-toxic ingredients in general. Hence, it is unlikely for Khosik to suffer from food poisoning for her weird habits.

However, a lot of people advised her to stop eating soap as it is able to block and damage her digestive tract.

So, don’t try to eat soap for fun during your shower!