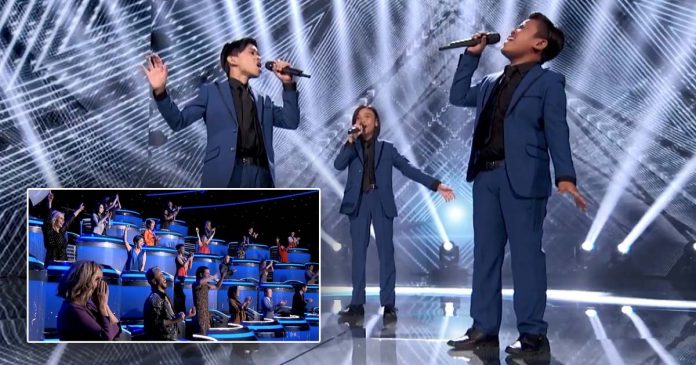 Every kid dreams of making their parents proud, and this talented singing trio from the Philippines, the TNT Boys, are doing just that.

After the show, they decided to band together to form The Big Shot Trio.

Their stunning voices have shot them to fame around the world, and they’ve even performed on the Ellen DeGeneres show!

But one performance has captured everyone’s hearts in particular—CBS’ reality show, World’s Best.

The three young boys impressed in matching blue suits and performed a stunning rendition of Beyoncé’s “Listen” in front of three judges.

Their voices are so in sync, you would think they’d been performing together for years!

They hit all the high notes effortlessly.

Their incredible talent makes it so hard to believe they’re just teenagers.

Judge and American actress Drew Barrymore was so impressed by the three boys, that she got goosebumps.

“You possess a gift, you’re just that good,” she said after their performance, adding that she has a soft spot for kids.

Judge Faith Hill added, “First of all, you have some serious attitude. You’re so precious and so sweet but when you were singing, you were in that song, you were like, bam!”

And the kids’ responses are so adorable! Each compliment brought a massive smile to their faces as they thanked each judge excitedly.

“I am so proud right now to represent the Philippines. On behalf of the Filipinos, guess what? I know for a fact that you can be The World’s Best!” Filipino judge Pops Fernandez told the trio enthusiastically.

Watch their stunning performance in the video below, and be prepared to be blown away by their incredible singing voices!