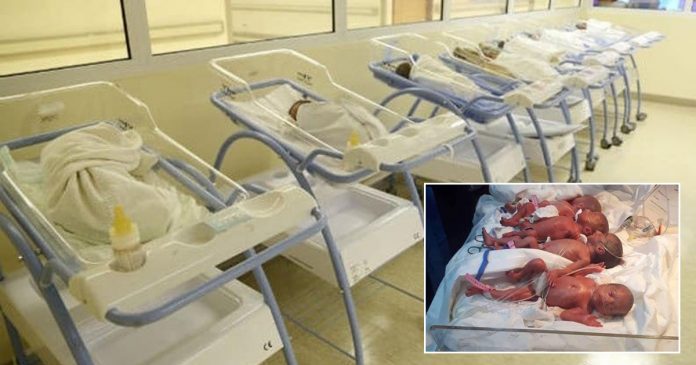 Not twin or triplets, a new mother from Iraq was reported to incredibly give birth to seven babies at a hospital in Diyali province of eastern Iraq. The amazing 25-year-old mother was said to give birth naturally to the six girls and one boy—the country’s first ever septuplet!

After having seven babies in a single natural birth at Al-Batul Teaching Hospital, a spokesman for the local health department Firas Al Izzawi released a statement saying the mother is perfectly healthy.

After undergoing multiple check-ups, the seven newborn babies are also said to be in completely good health.

They would be the first delivery of septuplets recorded in Iraq.

The septuplet’s father, Youssef Fadl shared that he and his wife didn’t plan to expand their family but now they suddenly have ten youngsters to look after—probably including the children they had before the septuplets.

The hospital where the birth of the septuplets took place.

As reported by the newspaper Al-Raya, Director of Health Information Diyala Fares al-Azzawi has described this incredible birth as being ‘a unique precedent at the level of Iraq’. Septuplets are indeed an extremely rare occurrence no matter where we live in the world.

Another surviving set of septuplets were born in 1997 to Kenny and Bobbi McCaughey of Des Moines, Iowa. During Bobbi’s pregnancy, the couple refused the option of undergoing a ‘selective reduction’ and chose to leave the matter in God’s hands.

The septuplets are now on their 21st birthday in November 2018 and currently finding their own paths as adults.

May the first septuplets in Iraq growing up healthy and bright!

Armed robber goes in to Walgreens, but what cashier does—he leaves...