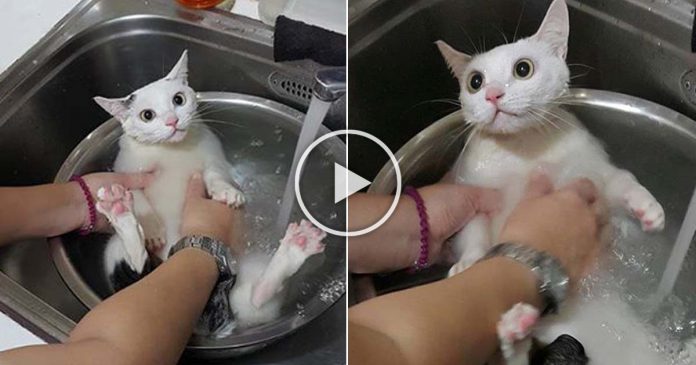 Most often than not, bathing a cat is one of the struggles that many cat owners can relate with. However, for this cat, bathing is actually her most favourite thing in the world.

While most cats are easily fascinated with water, they dislike getting their fur wet unexpectedl—be it taking a bath or getting soaked in the rain.

Unlike her feline counterparts, the cat named Cute Mimi loves bathing the most.

In fact, her owner, Miss Liao never had any problems bathing her as the cat really enjoys it.

Cute Mimi is not even fussy when it comes to taking a bath. All she needs is only a sink and a large bowl to bathe in.

According to Miss Liao, Cute Mimi often takes her bath in the sink.

When asked why she bathes her cat in the sink, Miss Liao replied that it is more convenient for her to bathe Cute Mimi compared to the bathroom.

Plus, Cute Mimi seems more relaxed when she takes a bath in the sink.

Video of her bathing in the sink quickly went viral after Miss Liao posted it on social media with many praising the cat’s adorable expression while she is being bathed.

Apart from bathing, Cute Mimi even enjoys trimming her claws. Even though sometimes, she might not like to trim her claws, it does not take much effort for her owner to gently persuade her into staying calm while she trims her claws.

All it takes is only a minute and five seconds to trim Cute Mimi’s claws!

According to Miss Liao, Cute Mimi was once a stray cat which she discovered when she was buying groceries at the farmers’ market.

She felt sorry for Cute Mimi after she saw her being kicked by a young boy and later decided to adopt her.

“Mimi was only three months old when I adopted her. She is my first pet cat as I never adopted one before,” Miss Liao said

At first, she was concerned that Cute Mimi might not get along well with her pet dog, Dudu. Luckily, both Dudu and Cute Mimi got along very well and became the best of friends.

Watch this video to see how cute this gentle feline is.