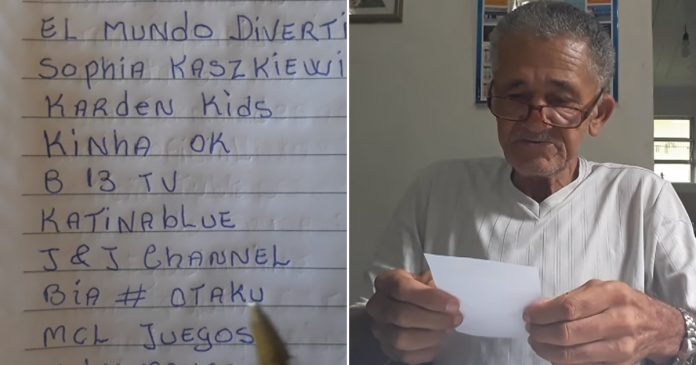 Nowadays, it’s nothing uncommon when you work as a YouTuber, making all sorts of contents of your own interest as early as the age of 4. But this elderly grandpa YouTuber has taken the internet by storm, thanks to the power of good, old-fashioned manners.

Nilson Izaias Papinho has so far released more than 30 videos on Youtube with an eclectic range of interests that document his everyday life—from gardening to cakes. They are so natural that one can’t help but smile watching them.

There were also several videos dedicated to the art of making slime, which is rather therapeutic and satisfying to watch.

Nilson is enjoying his time making and showing his slime in one of his videos. He sometimes sings and dances to entertain his subscribers.

As he gathered more and more subscribers over time, Nilson decided to do something about it. Just like the saying ‘manners maketh man’, Nilson wrote down all the names of his subscribers in a notebook as a means to thank each and every one of them. He later showed the list in a heartwarming and full of gratitude video.

To make sure that he does not miss out any subscribers, he used a pen to point the names as he read them out one by one in his video.

For example, he thanked and pronounced “Bia hashtag otaku.”

All his videos are in Portuguese but his kindness has broken the language barrier. Thanks to his respectful manners and overload cuteness, Nilson’s popularity boomed and his channel now boasts well over 4.3 million subscribers at the time of writing.

Nilson proved that being a sweet and thoughtful person also holds the power to influence and inspire people.

Referred fondly to as ‘grandpa’ or ‘friend’ by his followers, Nilson’s loyal fanbase has shown appreciation for this lovely man by leaving a bunch of kind comments and beautiful remarks on his channel.

“You deserve everything good!” commented one person.

“You are so cute! I barely entered this channel and I already love it!” added another person.

Nilson proved that good, old-fashioned manner is powerful too! Thanks to Nilson for this reminder, let’s be more like him to be thoughtful and thankful in life.

Teen’s life turn around after he custom-made a prom dress for...