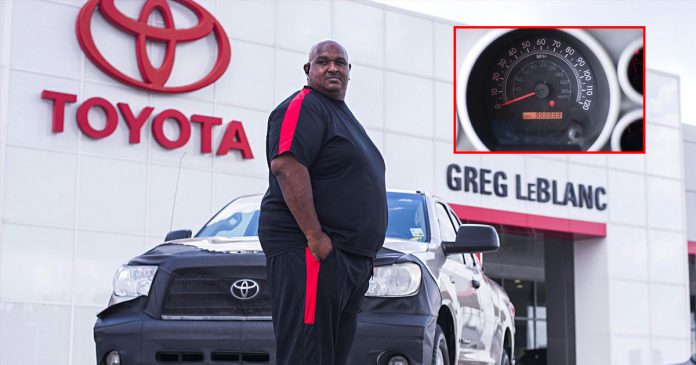 When Victor Sheppard first bought his Toyota Tundra truck, he’s determined that he was going to put a million miles on it and told General Manager Ron Weimer of Greg LeBlanc Toyota, the dealership who sold it to him and has all the service records on it.

Ron played along and said that when Sheppard really hit a million miles, he’ll be there right along with him—never really thinking that it would happen one day. After days, months, and years went on, Ron kept an eye on Sheppard’s Tundra.

After exactly 9 years and 1,020,130 miles later, Toyota really did come calling for the truck.

“I could put another 20,000 miles on it right now,” said Sheppard, reluctantly passing along his 2007 Toyota Tundra to the only buyer who could wrestle the truck for him—Toyota.

“One day I was driving and the truck’s odometer hit 999,999 miles. I kept waiting for it to turn over, but it didn’t and I knew I had gone more than a mile. I brought it into LeBlanc to have it inspected,” recalled Sheppard.

After the inspection, they found out that the truck’s odometer just didn’t have a way to track any more miles and there’s nothing wrong with it. So, Sheppard started using the trip odometer to keep track.

Sheppard and his truck.

To celebrate the more than a million miles used-truck transaction, Toyota flew in corporate team members such as Mike Sweers, chief engineer for the Tundra and Tacoma, while Gulf States Toyota representatives were on hand. Greg LeBlanc Toyota also rolled out the red carpet, hired a band, a caterer, and even brought in a bounce house to celebrate the milestone.

Excited to inspect the truck, Sweers looking around and found small blemish and a dent here and there but the truck really doesn’t give the impression that it has that many miles on it.

Remarkably, Sheppard knows every dent and where it came from by heart and each dent has its own story.

“You know how that skidplate got dented? I hit one of those small traffic cones on the highway after I couldn’t get out of the way because another car was next to me,” recalled Sheppard.

As Sheppard has become quite attached to the truck, he reluctantly agreed to part with it when Toyota approached him to convince him to give up the truck. Sheppard gets a new ’16 Toyota Tundra Double Cab Limited to drive from now on.

He admitted that he’s going to miss a few things about the old truck, but he’s also excited to see what the new truck will do.

And the new journey to put a million miles on the new truck begins!