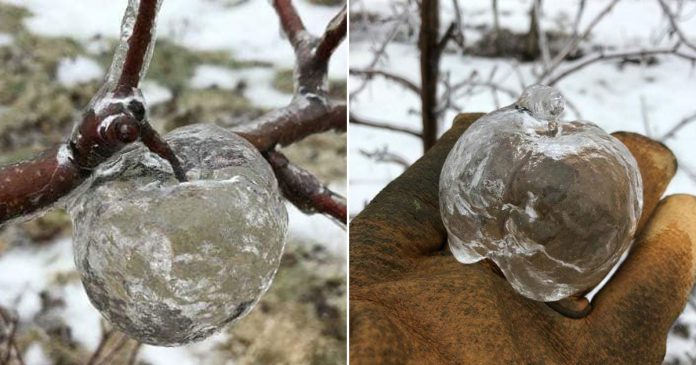 Mother nature never ceases to amaze us every single time and this unusual ‘Ghost Apple’ phenomenon in the Fruit Ridge area of Kent County, Michigan is definitely one of those fascinating moments.

When the ‘ghost apple’ was discovered, a lot of people were fascinated by the appearance of ice that looked exactly like an apple hanging on a tree while some others were just looking for the scientific explanation for this beautiful occurrence.

The ice was perfectly frozen into the shape of an apple.

Andrew Sietsema was having his sweet time pruning apple trees earlier when he came across the interesting hollow ice apples and sent in the photos to ReportIt late Wednesday night.

Sietsema explained that the hollow ice apples were formed as the freezing rain coated the rotten apples, creating a solid icy shell around them. Many of the frozen apples fell off when Sietsema was pruning as the trees would shake during the process. However, there were few cases where the mush slipped out of the bottom of the ice casing—leading a ‘ghost apple’ to appear.

Sietsema found the ‘ghost apple’ while pruning his apple trees.

Sietsema further explained that temperature was cold enough for the ice to remain, but warm enough for the apples to turn to complete mush since the fruit has a lower freezing point than water. Hence, the ‘ghost apple’ appeared.

Jonagolds are one of Sietsema’s favorite apple varieties, but he called this one ‘Jonaghost’.

Nature is amazing! Share with us in the comment section if you’ve come across this ‘ghost apple’ before!