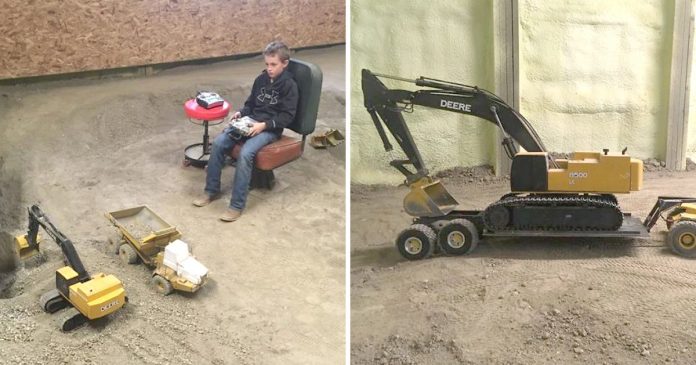 Joe Murray, a Canadian farmer, climbed down into the basement of his house one day and wondered what was beneath it. Using just a couple of remote control (RC) toys, he never looked back, calling it his hobby and escape from his daily reality.

He started excavating his own basement in 2005, making sure to document each one.

“I have greater dexterity in both hand and eye coordination,” he told news.com.au. “I can better judge accuracy at a good distance from me.”

He also claims he can mentally picture several different scenarios on how to tackle a project best, and can plan for success with a lessened chance of a costly failure.

At the beginning of his project, it was mostly hands-on. He started with a pickaxe on one of his walls, and switched to an air chisel hammer to reduce dust and dirt. He has now expanded to a large fleet of construction equipment models from German-made Fumotec.

This RC toy enthusiast had estimated that he can shift about three cubic meters of soil every year. In 2010, he went almost hands-free after getting an 88-lbs JD850 excavator with an operating hydraulic pressure.

Discoveries waiting to be found.

He regularly uploads his progress and discoveries on YouTube, which has amassed over 6.3 million views. After he’s done with the basement, he plans to move on to his barn.

“I’m looking forward to the barn, it has a much bigger area and it’s flatter too, which is better for big and powerful RC models,” Joe added. “I might dig a pond in there with some river channels for tugboats or barges, we’ll see.”

If that’s not passion for something you love, we don’t know what is.

Watch the video below for a feel of his hobby!