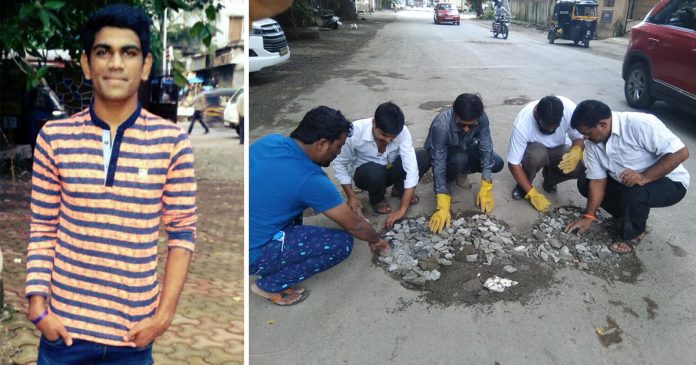 In 2017 alone, pothole accidents claimed the lives of 3,597 people across India. One of them was Dadarao Bilhore’s teenage son, Prakash.

16-year-old Prakash was a pillion rider on his cousin Ram’s motorcycle when they suddenly crashed into a deadly pothole.

It was monsoon season and the massive 2-feet-deep pothole later sent Ram and Prakash flying into the air.

Ram who wore a helmet at the time managed to survive the violent collision with minor injuries on his chin and forehead. Unfortunately, Prakash who did not wear a helmet suffered from hemorrhage.

Prakash did not survive the crash.

It was only a few days before he registered to college. The pain of losing his teenage son was unbearable for Bilhore. “My son was intelligent and extremely hardworking. He did us proud by becoming the first one in the family to have studied in an English medium school,” Bilhore told The Indian Express.

Following the fatal crash, Bilhore pledged to save innocent lives by filling up potholes across the city of Mumbai where he lives.

With his shovel, Bilhore fills up each pothole he finds with sand and gravel as he silently prays for Prakash.

“Prakash’s sudden death left a huge void in our lives. I do this work to remember and honor him,” Bilhore told AFP.

“I do this so that hopefully no one else suffers the pain I did,” Bilhore said to the Los Angeles Times.

In the past three years, Bilhore and other volunteers have filled up nearly 600 potholes in Mumbai.

Bilhore did raise the concern and seek justice to the local authorities as he visited the police station several times. However, officials at Brihanmumbai Municipal Corporation and the contractor have yet to come forward.

“They are playing with people’s lives with that kind of shoddy work,” he said.

“This battle is for my son and all those who have lost their dear ones, because of potholes. Soon, others too will realize and demand compensation. This will also compel authorities to take prompt and timely action,” he said.

In spite of this, Bilhore will still continue filling up the potholes for the rest of his life.

His reason was only one; he did not want others to lose their loved ones because of the potholes.

As long as I am alive and can walk, I will get rid of all of these potholes,” Bilhore said.

Find out more about Bilhore here

Homeless man was given a makeover and reunited with family when...