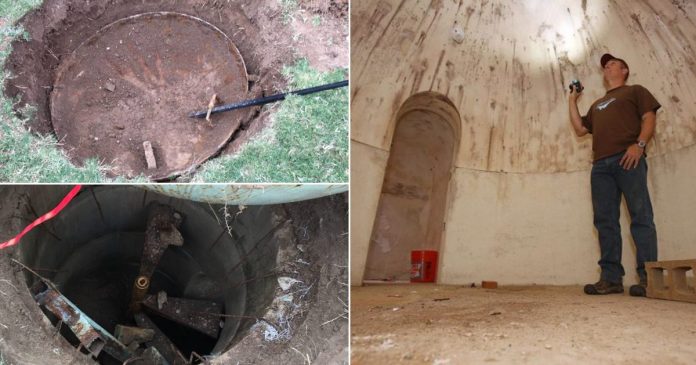 John Sims stumbled upon an unexpected discovery when he was checking a house that he recently bought from a friend back in 2015. After he sealed the deal, John found that he did not just buy a house, but also a shelter. And it wasn’t just any old shelter, it was a Cold War bomb shelter.

Buried in his backyard, the bomb shelter was built by a man named Whitaker Pools in 1961. Amazingly, no one except the previous owner even knew the house existed until John discovered it. He must have been the only other person to step into it!

A plan of the shelter’s interior.

The entrance to the shelter.

With a helping hand from an expert who used a metal detector, John managed to identify the exact location for excavation works. He had to dig up to 3 feet of depth before reaching the entrance of the shelter.

John also had the sense to wait out before stepping into the chamber. As a fireman, he was aware of the risks. The possibilities of things that can occur once he steps in are endless; after all, the shelter has remained unopened for over half a century.

Once he felt it safe to venture into the chamber, he descended down circular steps and found himself in a fiberglass dome shelter filled with rubble.

“I was hoping to find a microcosm; a time capsule full of civil-defense boxes, radiation detectors, cots, stuff like that,” John said.

Although his discovery did not quite meet his expectations, John was still excited with the prospect of using the space as his own personal hideout. He even fixed and tweaked the facilities: added concrete to the descending entrance, refurbished the steps, and bought a few genuine artifacts from a nearby shelter in the area.

John shares every single piece of discovery and his work progress on Reddit, where he receives hundreds of interesting comments. He hopes to complete his mission of bringing the shelter back to its glory days.