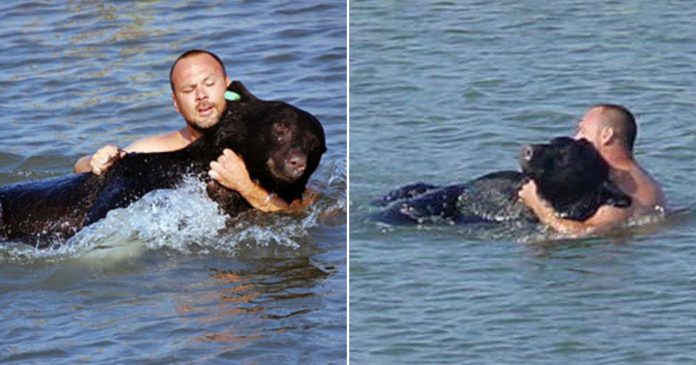 A 400-lbs black bear followed his nose and accidentally wandered into a residential area in Alligator Point from his home in Osceola National Forest, Florida. When wildlife authorities arrived, things began to take a different turn.

He was discovered shuffling through a resident’s garbage and witnesses immediately alerted the authorities.

The authorities had shot the bear with a tranquilizer dart, which frightened the poor bear and made him run towards the water. Unfortunately, the tranquilizer took some time before working, and it wasn’t until the bear had swam over 25 yards that it began to take effect.

The bear ran towards the water, frightened from being shot.

Adam Warwick, a biologist with the Florida Fish and Wildlife Conservative Commission, decided that the bear is in need of help and jumped into the water.

Warwick later told the Telegraph, “I wasn’t sure what I was going to do when I jumped in,” he said. “It was a spur of the moment decision. I had a lot of adrenaline pumping when I saw the bear in the water.”

The bear was unable to move his lower body due to the tranquilizer shot.

Without flinching at the animal’s size and weight, Warwick grabbed the bear and held on. The bear eventually lost strength in his legs and struggled against Warwick to keep himself afloat.

Both of them have weakened, but are pushing on.

“At times he even looked as if he was just going to climb on top of me to keep from drowning,” he added. The strong biologist acted quickly and tried to stay as calm as possible, dragging the bear to the shore.

The bear eventually lost strength in his upper body, and struggled to keep his head above water. With the bear losing mobility, Warwick now must make sure that both of them do not drown.

“At that point, I knew I had to keep the bear from drowning,” Warwick said. “After a few seconds, the bear popped his head up out of the water and thrashed around a bit, but could obviously no longer keep his head above water.”

Thankfully, they were almost to shore by this time and Warwick swam harder to bring the bear to shore.

Finally, the groggy bear and an exhausted Warwick managed to close the 25 yards. Now fully immobilized, the bear proved to be too heavy for the crew to handle.

A tractor was called in to help transport the bear from the beach to a proper vehicle transport which will take the bear home to the national forest.

Suffering only a cut foot from a barnacle and a single scratch from the bear, Warwick said, “It’s a lot easier to drag a bear in four-foot water than move him on dry land.”

Warwick was there by the bear’s side the whole time to make sure his sleepy friend was safe. Now back home, the bear is looking much happier!