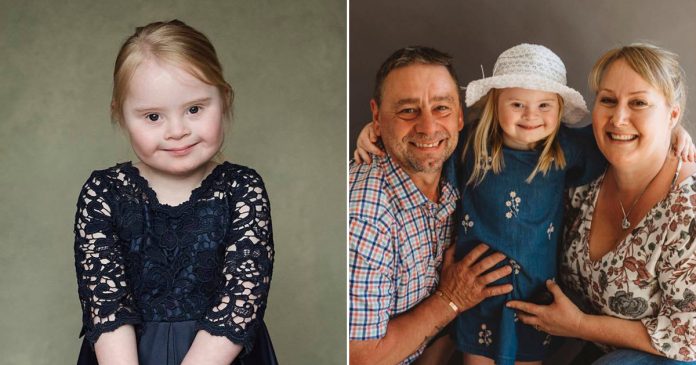 At a tender age of 7 years old, Grace Isabella Wharton has already carved her name as an aspiring child model despite being born with Down Syndrome.

The adorable girl who lives in Cheshire has already become a role model for many children, especially young girls to embrace their shape, size and talent.

Grace may be young but she already boasts an impressive portfolio with her modeling career including working with Disney and CBeebies.

She was also the star in a diversity campaign called “Behind The Scars”.

In spite of her successful career as a model, it was not easy for her parents, Cheryl and John Wharton when Grace was born.

When the Whartons discovered that Grace would be born with Down Syndrome, they were devastated at first. However, abortion was never an option for the couple.

“Of course, I was devastated at first,” Cheryl told Daily Mail. “There’s such a lot of negativity surrounding Down Syndrome. I cried for 24 hours,” she said.

“But we got up the next morning and said no matter what, this is our baby. And from that point on, we have just celebrated everything about her. She is incredible,” Cheryl added.

Grace may be born with Down Syndrome but she is just like any other young girls who like to dress up and pose in front of the camera.

Realizing that her daughter had the desire and interest for being in front of the camera, Cheryl then responded to an advertisement on Facebook about casting for a model with a disability.

“We saw an advertisement on Facebook asking for a model with a disability,’ Cheryl said.

“We thought, why not? And a couple of weeks later we were invited to Grace’s first official photo-shoot,” she added.

The photo-shoot apparently went well that Grace was offered more modeling jobs later on. “Grace absolutely loves being in front of the camera,” Cheryl said.

“Everyone has always said she’s really cute and she loves posing, she loves showing off her catwalk modeling.”

Since then, more companies started to take an interest in Grace like Disney and CBeebies.

Currently, the aspiring young model is represented by Zebedee Management along with 300 other models with disabilities.

It is not a surprise that Grace has managed to make it this far as she has a vibrant smile, confident and amazing both on and off camera!

Find out more about Grace Isabella Wharton in this video here