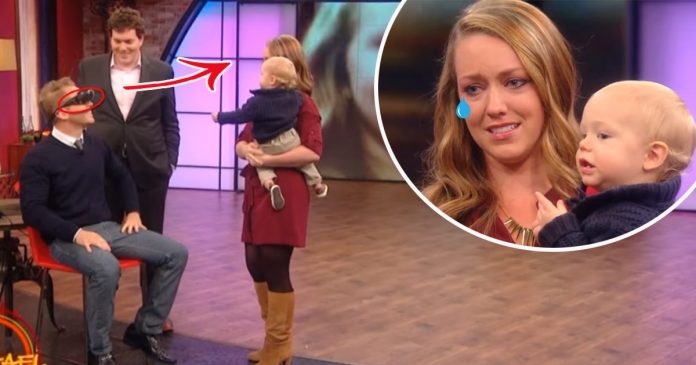 Gene was born with Stargardt disease but it did not affect his eyesight until he was 16. After that, his eyesight slowly deteriorated and his world became permanently blurry until his wife found a way to overcome it.

This disease would attack an individual’s center of vision, making focus impossible. Everything around the center of vision would become blurry, making daily activities difficult.

His wife, Joy, was determined to help get his sight back and immediately reached out to Rachael Ray when she saw a guest with Stargardt disease got her sight back on Rachael’s show.

Gene has had the affliction for years now.

By coincidence, Joy was watching a Rachael Ray show and the episode that day showed a guest with an affliction similar to her husband’s. The guest that day had gotten back her vision with a pair of technologically advanced lenses aiming to refocus a person’s center of vision so that clear sight is possible.

He never truly knew what his wife looked like.

Joy immediately wrote a letter to Rachael, asking for her help. Rachael responded with an invitation for her whole family to the show, giving a chance to Gene to see his family for the very first time.

Gene taking in his sights for the very first time.

“Wow, she’s pretty,” Gene said as soon as he put on the glasses and saw his wife for the very first time. With that, Joy started crying. It was a very emotional experience for their family.

A beautiful moment for their family.

Gene’s parents were also in the audience that day, and Rachael invited them on stage. Gene saw his parents’ faces after years of not being able to and it was extremely heart-rending.

The great minds behind the glasses, E-Sight, have decided to donate the $15,000 glasses to Gene and his family. It was a beautiful moment for them. Now, Gene can continue with his daily life and his cooking hobby with a better focus.

Watch the emotional episode below.